SEOUL, Dec. 11 (Yonhap) -- The sensational global ascent of K-pop band BTS has brought to the fore the emergence of a new breed of globally connected, dedicated fans as represented by ARMY, the group's fandom.

Powered by the connectivity of the internet and social network services, ARMY engages in organized transnational operations to download BTS songs and vote for the septet en masse, spearheading the band's victories on Billboard and major American music awards.

Such phenomena reshaped the landscape of pop music culture in the era of cross-border internet and communication technologies, scholars said during an academic seminar held in Seoul on Wednesday. 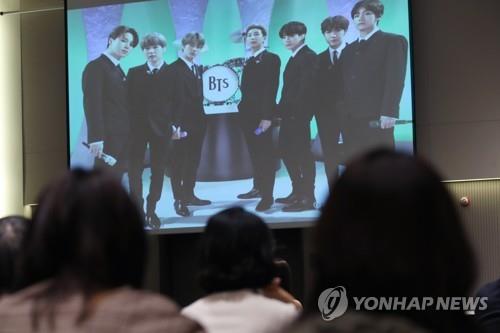 "K-pop fandom is a highly organized network community with specific communal goals. Fans will mobilize their resources via digital media and technology and perform affective labor to achieve those goals," Areum Jeong, an assistant professor at Sichuan University-Pittsburgh Institute in China, said during the seminar, "K-pop Beyond BTS," hosted by the Korean Society for Journalism & Communication Studies.

Lu Tian, a Ph.D candidate at Hong Kong Baptist University, focused on how the popularity of BTS led to cross-border flows of people, texts and imagery.

"'Bangtan Tour' should be seen as a participatory practice of global BTS fans, whose affective commitments to the idol group create additional values of places," she said, referring to ARMY's pilgrimage tours to South Korean places related to BTS members.

Another scholar, Michelle Cho, an assistant professor at the University of Toronto, attributed K-pop's breakout global success to the emergence of new media.

"K-pop is a visual culture, not simply a musical genre ... K-pop's growing visibility is entirely attributable to a nexus of new media forms," she said in her presentation during the seminar.

"Social media participation constitutes an immersive, everyday form of meta-media ... the vicarious media I examine shows reflexivity to amplify rather than contain affective excess," she said, referring to how SNS communications between BTS and fans bind them tightly together.

"K-pop is no longer an East Asian phenomenon. It's global pop culture," she said, adding that the ascent of BTS has redefined masculinity as previously defined by the West. 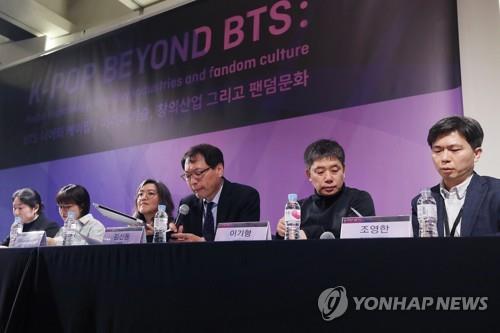