WASHINGTON, Dec. 11 (Yonhap) -- The United States is ready to be flexible in negotiations with North Korea on dismantling the regime's nuclear weapons program, the U.S. envoy to the United Nations said Wednesday, urging Pyongyang to refrain from provocations.

Ambassador Kelly Craft made the remarks at a U.N. Security Council session as Pyongyang's year-end deadline for nuclear negotiations with Washington draws near.

Amid indications the North is preparing to launch a long-range missile, Craft warned that such activity will only complicate efforts to implement an agreement reached by U.S. President Donald Trump and North Korean leader Kim Jong-un at their first summit in Singapore in June 2018. 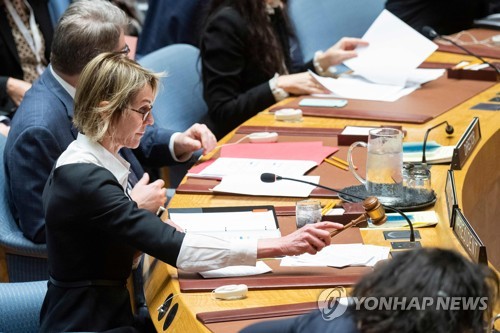 "We remain ready to take actions in parallel, and to simultaneously take concrete steps toward this agreement," Craft told the Council in New York, in live online footage.

"We are prepared to be flexible ... and we recognize the need for a balanced agreement that addresses the concerns of all the parties," she continued. "But we cannot do this alone. North Korea must make this difficult but bold decision to work with us."

Speaking to reporters before the meeting, she said North Korea "must do its part, and it must avoid provocations."

Trump and Kim agreed in Singapore to "work toward" complete denuclearization of the Korean Peninsula in exchange for U.S. guarantees and also pledged to improve the two countries' acrimonious relations.

But progress has been slow amid persisting gaps over how much North Korea will need to denuclearize in order to receive sanctions relief and other concessions from the U.S.

North Korea has strongly suggested it will return to testing nuclear bombs and intercontinental ballistic missiles if the U.S. fails to offer concessions in their stalled negotiations by the end of the year.

Reinforcing the concerns, North Korea on Saturday conducted what it called a "very important test" at its western satellite launch site. South Korea has said it involved a rocket engine.

"We hope that we do not find ourselves at an inflection point in the near future," Craft said. "We trust (North Korea) will turn away from further hostility and threats, and instead, make a bold decision to engage with all of us."

She warned, however, that if events prove otherwise, the Council must prepare to "act accordingly." She added that any discussion of a "new road map" or Security Council resolution must reflect the "reality" that North Korea has continued to develop and test its banned weapons programs and refused to engage in sustained dialogue over the past year and a half.

"We have not asked North Korea to do everything before we do anything," the ambassador said. "In fact, we have taken many steps to bring about the resolution through dialogue and have conveyed this message clearly to North Korea. But we need a committed negotiating partner to take the reciprocal actions required for progress."

She said the regime's launch of "more than two dozen ballistic missiles" this year not only violate Council resolutions but also "risk closing the door on this opportunity to find a better way for the future."

She also said North Korea has threatened to take a "new path" unless the U.S. acquiesces to its demands and hinted at resuming serious provocations.

"In practical terms, this would mean that (North Korea) could launch space vehicles using long-range ballistic missile technology, or that they could even test-launch intercontinental ballistic missiles, which are designed to attack the continental United States with nuclear weapons," Craft said.

During the council session, Cho Hyun, South Korea's ambassador to the U.N., called for "every effort" to keep up the dialogue process with the North, stressing that dialogue and cooperation are the "only possible way forward."

"A legacy of 70 years of war and hostility on the Korean Peninsula cannot be overcome in a single day," he said.

"We will need to pursue this delicate path of dialogue with perseverance and focus, and every effort should be made to keep the momentum of this process going," he added, calling the process "our top priority."

He also pointed out that Seoul shares the concerns of the international community over the North's repeated missile tests, but called for "meaningful" support, including humanitarian aid, for the North to "make the right decision."

Trump has touted the North's self-imposed moratorium on nuclear and long-range missile tests as one of his major diplomatic victories and played down the regime's recent testing of short-range missiles.

That the U.S. convened Wednesday's session as president of the Council for this month suggests that Washington takes seriously the recent escalation of threats.

U.S. Special Representative for North Korea Stephen Biegun met with U.N. ambassadors ahead of the meeting to apparently call for a unified front against the regime's provocations.

(3rd LD) U.S. says it is ready to be flexible, urges N. Korea to avoid provocations

(3rd LD) U.S. says it is ready to be flexible, urges N. Korea to avoid provocations