SEOUL, Dec. 12 (Yonhap) -- U.S. Special Representative Stephen Biegun is expected to make a last-ditch effort for a turnaround in deadlocked nuclear talks with North Korea, as he reportedly prepares to travel here weeks ahead of Pyongyang's year-end negotiation deadline.

His trip to South Korea would come amid heightened tensions caused by the North's recent provocative weapons tests and concerns over its possible long-range rocket launch that could stymie Washington's engagement with Pyongyang.

Reports said that Biegun, now the nominee for deputy secretary of state, may arrive in Seoul this weekend and could travel to the inter-Korean border truce village of Panmunjom for possible contact with North Korean officials. 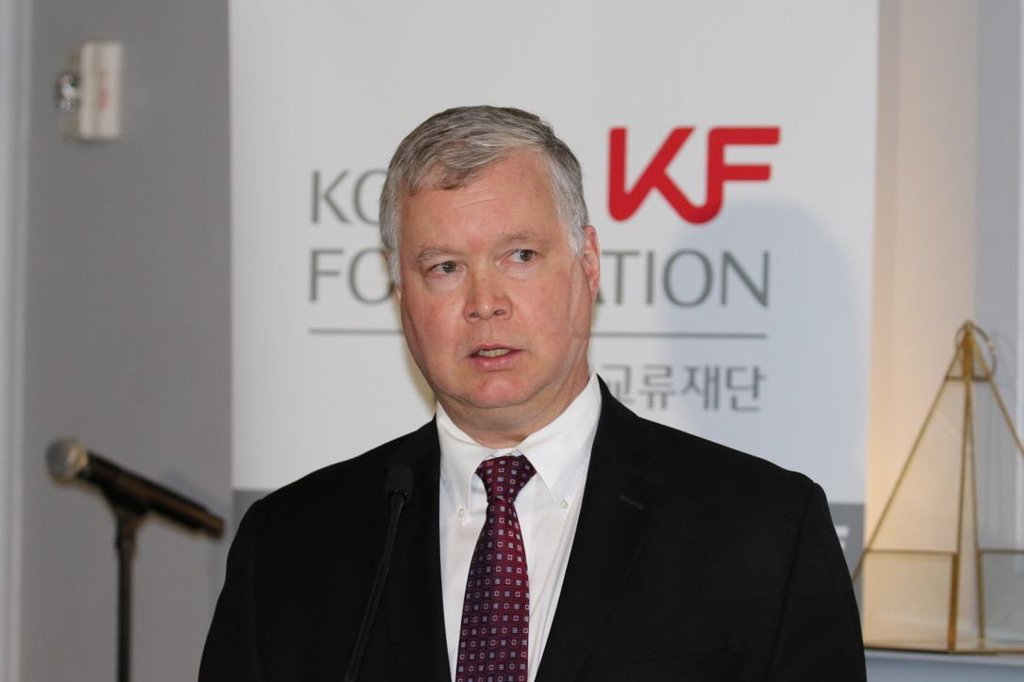 "First and foremost, Biegun may explore ways for a breakthrough in nuclear talks with the North and try to prevent its possible long-range rocket launch," Shin Beom-chul, a senior fellow at the Asan Institute of Policy Studies, said.

"There will be a possibility of the top U.S. negotiator visiting Panmunjom for contact with the North given that both Washington and Pyongyang do not want to break the dialogue process altogether," he added.

During his stay here, Biegun is expected to meet his South Korean counterpart, Lee Do-hoon, and other top Seoul officials to strategize on steps to bring the North back to the negotiating table and break the logjam in the nuclear talks.

Biegun held the last working-level negotiations with his North Korean counterpart, Kim Myong-gil, in Sweden in October, but the talks ended fruitlessly, with Kim accusing the U.S. of having come to the table "empty-handed."

Despite the absence of progress, the U.S. has continued to signal its readiness for negotiations with the North, as well as its willingness to show flexibility.

"We remain ready to take actions in parallel, and to simultaneously take concrete steps toward this agreement," U.S. Ambassador to the U.N. Kelly Craft told a Security Council session on Wednesday. Washington requested the session to discuss the North's recent missile launches and the possibility of future provocations.

"We are prepared to be flexible ... and we recognize the need for a balanced agreement that addresses the concerns of all the parties," she added. "But we cannot do this alone. North Korea must make this difficult but bold decision to work with us."

The U.S. request to convene the council session was seen as a tacit warning that should the North undertake a strategic provocation such as an intercontinental ballistic missile (ICBM) launch, the U.S. could toughen sanctions or take other biting steps in tandem with the international community.

Despite the U.S. moves to keep the dialogue process alive, recent weeks have seen an increase in skepticism over the nuclear diplomacy with the recalcitrant regime.

The North's apparent long-range rocket engine test at its west coast satellite launching station last week, following a series of dubious activities there, have raised fears that Pyongyang could pivot away from the fraught dialogue process.

All these provocative moves come ahead of a year-end deadline that North Korean leader Kim Jong-un set for Washington to come up with an acceptable proposal. Kim has warned that the North would take a "new way" if the deadline is not met, but the U.S. dismissed the deadline as merely "artificial."

In the face of the North's high-pressure tactics, U.S. President Donald Trump made it clear that he would not cave in. He even revived the threat of military action against Pyongyang and warned that North Korean leader Kim Jong-un could lose "everything" with hostile acts.

"Recent actions and rhetoric by the North could be its desperate appeal for the U.S. to prevent the current situation from worsening," Park Wong-gon, a professor of international politics at Handong Global University, said.

"But the war of words could fuel misperception or misapprehension that could drive the North into a decision to press ahead with a longer-range rocket launch," he added.

Should Biegun arrange a meeting with North Korean officials at the border village, chances do not seem high that the two sides could yield any meaningful outcome given that Pyongyang has shown greater rigidity in its demands.

The North has recently made vaguely worded calls for the U.S. to remove "all obstacles" that threaten its security and hamper its development. Analysts say the demands are their calls for sanctions relief and security assurances.

To push for the demands, Pyongyang could escalate its level of saber-rattling, analysts said, through launches of mid-range missiles, intermediate-range ones and then an ICBM disguised as a satellite for peaceful space development activities.

Analysts said Pyongyang might have already chosen to take a new path as evidenced by its start of provocative moves such as short-range ballistic missile tests since May, pretending to remain on the dialogue track to blunt the pain of biting international sanctions.