HANOI, Dec. 13 (Yonhap) -- Whatever Park Hang-seo is preaching to his players on the Vietnamese men's national football teams, it's working.

The South Korean head coach for both the senior and the under-23 teams in Vietnam has reached heights that none of his predecessors did. Most recently, he led the U-23 squad to the gold medal at the Southeast Asian (SEA) Games, giving Vietnam their first title at the regional multisport competition. 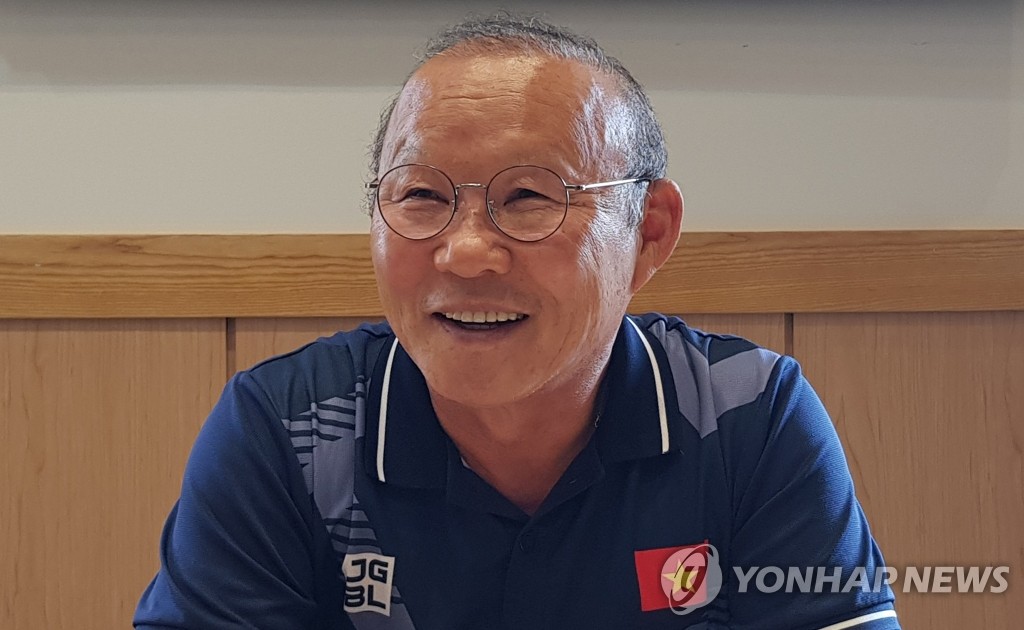 Park, who first took over Vietnam in October 2017 and signed a lucrative, two-year extension last month, will now try to take Vietnam to more uncharted territories: their first Olympic Games and their first FIFA World Cup.

And expectations from Vietnamese fans have been raised, after Park led the country to a runner-up finish at the 2018 Asian Football Confederation (AFC) U-23 Championship and to the semifinals at the 2018 Asian Games. Vietnam also won the Suzuki Cup title over Malaysia in December 2018, their first in 10 years.

But the 60-year-old tactician cautioned that qualifying for the two big tournaments won't be as easy as it sounds.

"In Southeast Asia, we've accomplished our goals at both the U-23 and senior levels, but the important thing for us is to maintain our throne," Park said in an interview with Yonhap News Agency on Thursday. "We have the Suzuki Cup coming up next year and another SEA Games two years later. Just because we're the best in Southeast Asia, that doesn't mean we'll be able to take on the world in just a couple of years. We need long-term plans to make it to the Olympics and the World Cup, and I don't think it'll be easy."

In January, Vietnam will compete at the 2020 AFC U-23 Championship in Thailand, and that competition will act as the Asian qualifying tournament for the 2020 Tokyo Olympics. The top three teams will punch their tickets to the Olympics. Vietnam will face North Korea, Jordan and the United Arab Emirates in Group D, with the top two advancing to the quarterfinals. 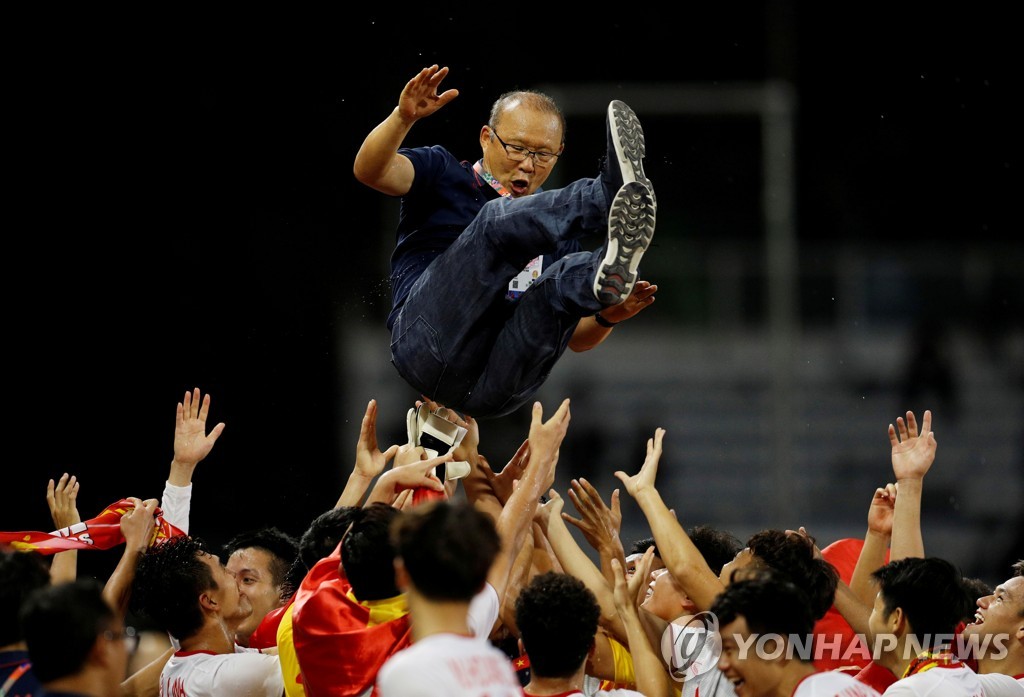 On the senior level, Vietnam are in the midst of the second round of the Asian qualifying for the 2022 FIFA World Cup. They're sitting atop Group G with an undefeated record of three wins and two draws, ahead of Malaysia, Thailand, the UAE and Indonesia. Vietnam have three matches remaining, and the eight group winners, plus four-best runners-up, will advance to the third round.

"At the AFC event, we'll try to make it to the knockout phase first and go from there," Park said. "With the World Cup qualifiers, we'll travel to Malaysia for our sixth match in March next year. If we win that, I think we'll be in a pretty good position to reach the next round."

Park said when he first arrived in Vietnam, he knew foreign coaches had lasted only about eight months on average, and his objective was to survive for just one year.

"I couldn't have done anything without the help of great coaches, supporting staff and players," Park said. "I was able to earn the trust of the Vietnamese people, and that allowed me to sign an extension."

Of all the feats he's accomplished, Park said he was most proud of winning the SEA Games and the Suzuki Cup, because both titles came on the heels of long droughts. 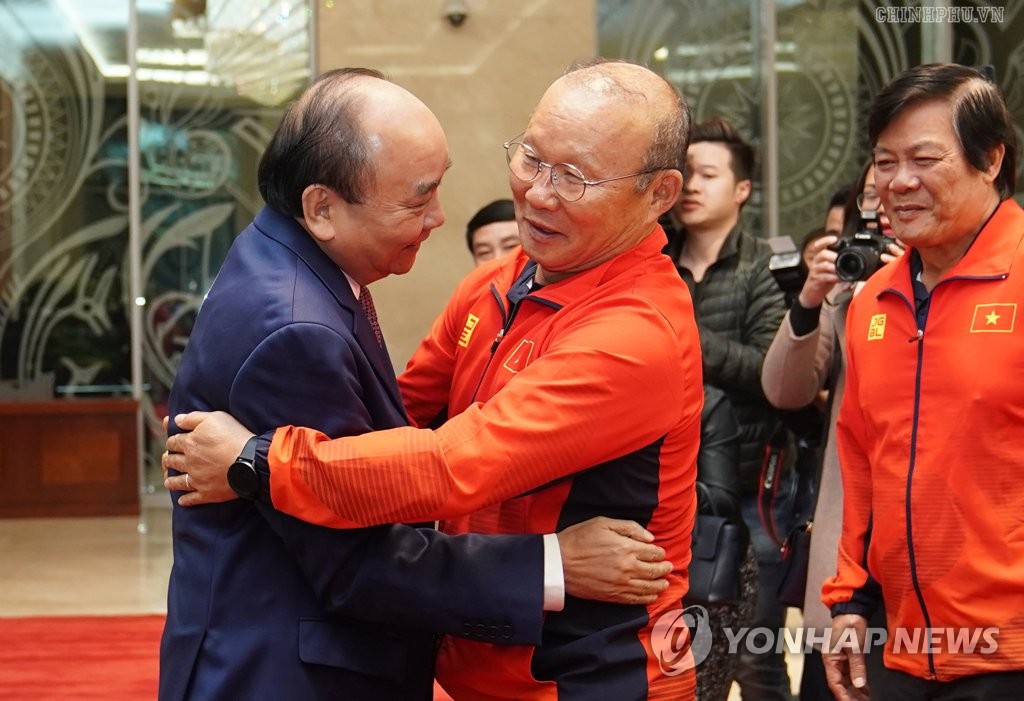 Park served as an assistant to Guus Hiddink on the South Korean bench when the Taeguk Warriors marched into the semifinals at the 2002 World Cup. Asked if a return to the South Korean national team was in his plans, Park said, "I think my time has passed."

"In Korea, there are a lot of coaches who are younger and more capable than I am," Park added. "I have no desire or intention to take the South Korean job. And I can't go anywhere (for now) because I've just re-signed with Vietnam."

But Park did thank fans in his native land for their support.

"I am trying to coach with a sense of responsibility and duty," Park said. "I am grateful for the continued support from football fans in my native Korea. I don't know how things will turn out in the end, but I'll try to remain a coach who never forgets where he came from."