SEOUL, Dec. 13 (Yonhap) -- South Korea seems to have begun exploring concrete ways in earnest to help ensure freedom of navigation in the Strait of Hormuz amid apparent pressure from the United States.

Briefing media on the results of a weekly session of the National Security Council's (NSC) standing committee Thursday, Cheong Wa Dae said its members reviewed how to contribute to the international community's efforts to protect South Korean people and ships "in the vicinity of the Strait of Hormuz" and secure maritime security there. It gave no details in a four-paragraph press statement on the meeting presided over by Chung Eui-yong, director of national security at the presidential office.

The U.S. has sought support from its allies, including South Korea, for its operation in the world's single most important oil passageway, especially since the rise of tensions with Iran several months earlier. 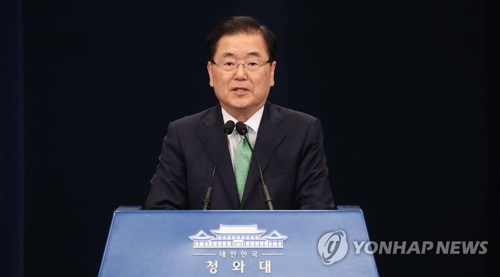 The Ministry of Defense said the U.S. has delivered its related "requests both directly and indirectly," but nothing has been decided yet.

It did not confirm whether Washington has specified what it wants, for instance dispatching troops or contributing money.

"The U.S. has stressed the importance (of its allies' role) and made requests for our participation both directly and indirectly during several meetings," ministry spokesperson Choi Hyun-soo told reporters. "We have been preparing for our contribution, but no decision on how to do that has been made."

Choi said that the government has been mulling various ideas without taking into account Japan's recent decision to deploy self-defense forces there.

Some media here reported that the government is considering expanding South Korea's military role and activity there "in stages."

A possible first step is to dispatch a defense officer to the local combined command led by the U.S. military.

South Korea's anti-piracy Cheonghae Unit is already operating in the Gulf of Aden. Earlier this month, the National Assembly passed a motion to extend its mission, which started in 2009, through Dec. 31, 2020.

Broadening its operational areas to cover the strategically important waters may also be a choice.

Cheong Wa Dae officials have also reiterated that no decision has been made yet. They have been cautious and prudent about mentioning the matter in public. 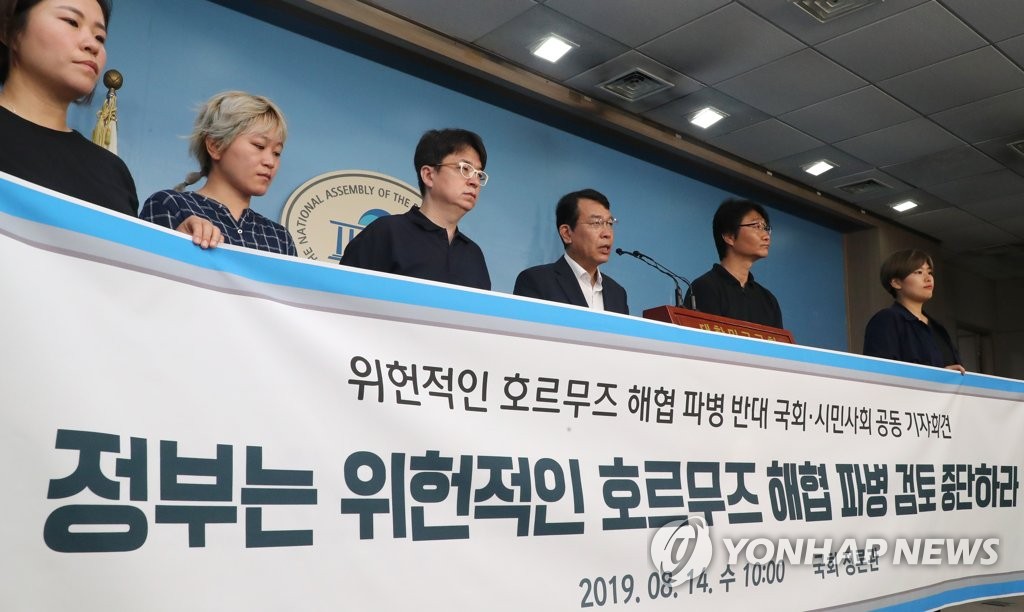 What's noteworthy is that Cheong Wa Dae has included the issue in its press briefing on the NSC meeting.

It came as Seoul is in tough negotiations with Washington on splitting the financial burden for the presence of the 28,500-strong U.S. Forces Korea.

The U.S. is demanding South Korea pay far more, reportedly a fivefold hike from this year's share of US$870 million.

South Korea has emphasized its commitment to playing a bigger role in handling not only regional security problems but also global affairs.

Officials here pointed out Seoul is spending a lot of money and making other efforts, either calculable or not, for the further development of the time-honored alliance.

Cheong Wa Dae may be trying to remind U.S. officials of South Korea's seriousness in its commitment as a key ally, while the Strait of Hormuz issue is not directly related to the defense cost talks.

Critics say it's unconstitutional to send troops to the strait.

"Participation in military action in the Strait of Hormuz is an act that will irritate Iran and increasingly fan conflicts," Rep. Kim Jong-dae of the progressive opposition Justice Party said.

South Korea should rather clarify its support for a diplomatic resolution to the security problem, he added.