SEOUL, Dec. 13 (Yonhap) -- Major convenience stores have suspended sales of flavored e-cigarettes, industry sources said Friday, following the government's warning against the use of such products for health concerns.

On Thursday, the Ministry of Food and Drug Safety announced that substances suspected of causing severe lung injuries were detected in 13 e-cigarette liquids sold here.

CU, a major convenience store chain, has ceased the sales of the four products -- two products from U.S. maker Juul Labs and another two by local tobacco manufacturer KT&G.

It follows an earlier move in October when CU suspended sales of Juul Lab's three products and one KT&G product after the government issued a warning against liquid type e-cigarettes.

At the time, CU allowed their convenience stores to sell their remaining inventories of liquid type e-cigarettes but confirmed that there will be no additional stocks of such products.

Smaller players, Emart 24 and 7-Eleven, also said they will halt sales of three flavored liquid e-cigarettes made by U.S. maker Juul Labs and one from state-run tobacco maker KT&G.

A total of 36 e-cigarettes by 11 tobacco companies have been sold in South Korea, while unregulated vaporizing products made of nicotine stem and root are known to be available on the black market

In South Korea, a suspected case of vaping-related respiratory illness was reported earlier in the year. The patient had smoked combustible cigarettes before recently switching to e-cigarettes, according to health officials.

The U.S. Centers for Disease Control and Prevention has recommended against using e-cigarettes following vaping-related lung injuries in the U.S. that have sickened more than 1,400 people and killed 33. 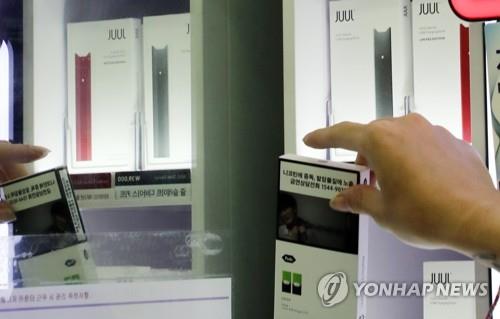