SEOUL, Dec. 13 (Yonhap) -- South Korea will mark the operational deployment of F-35A stealth fighters in a ceremony to be held behind closed doors next week, the Air Force said Friday, amid heightened tensions with North Korea.

South Korea has so far brought in 13 F-35As, beginning with two in late March, under a plan to deploy 40 fifth-generation jets through 2021. North Korea has strongly bristled at the introduction of the state-of-the-art fighters as a sign of hostility.

"We are scheduled to hold the ceremony on Tuesday at the Cheongju base to be presided over by the Air Force chief of staff," the Air Force said, citing its 17th Fighter Wing base in the central city of Cheongju, North Chungcheong Province.

"The Air Force secured all the units that we are supposed to bring in this year, and the jets are capable of carrying out operations at least to a limited extent," it noted, explaining reasons for the timing of the event.

The ceremony will not be open to the media, as the military believes that the asset "has been fully publicized" through such events as the Armed Forces Day event and the Seoul International Aerospace & Defense Exhibition (ADEX) in October, according to its officers.

"It is the country's key strategic asset and requires a high level of security, so that we will not publicize our F-35As down the road, excluding special occasions," an officer said.

The military has handled the issues in a low-key manner, sparking speculation that the government is concerned about complaints from North Korea. The communist country has lashed out at South Korea for the introduction of such advanced weapons.

Meanwhile, South Korea is scheduled to start bringing in Global Hawk unmanned aircraft this month, according to defense officials.

Under the deal with the U.S. worth around US$950 million, South Korea is to introduce four units of the RQ-4 Block 30 Global Hawk Remotely Piloted Aircraft (RPA), which is deemed one of the most advanced intelligence-gathering platforms in the world. 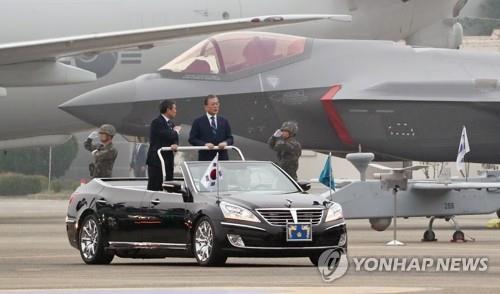