His three-day visit comes as concerns are mounting over the possibility of the North engaging in provocative acts such as a long-range rocket launch amid the limited progress in its negotiations with the U.S.

Upon arriving at an airport west of Seoul, the special representative for North Korea, now the nominee for deputy secretary of state, refused to answer questions from reporters. 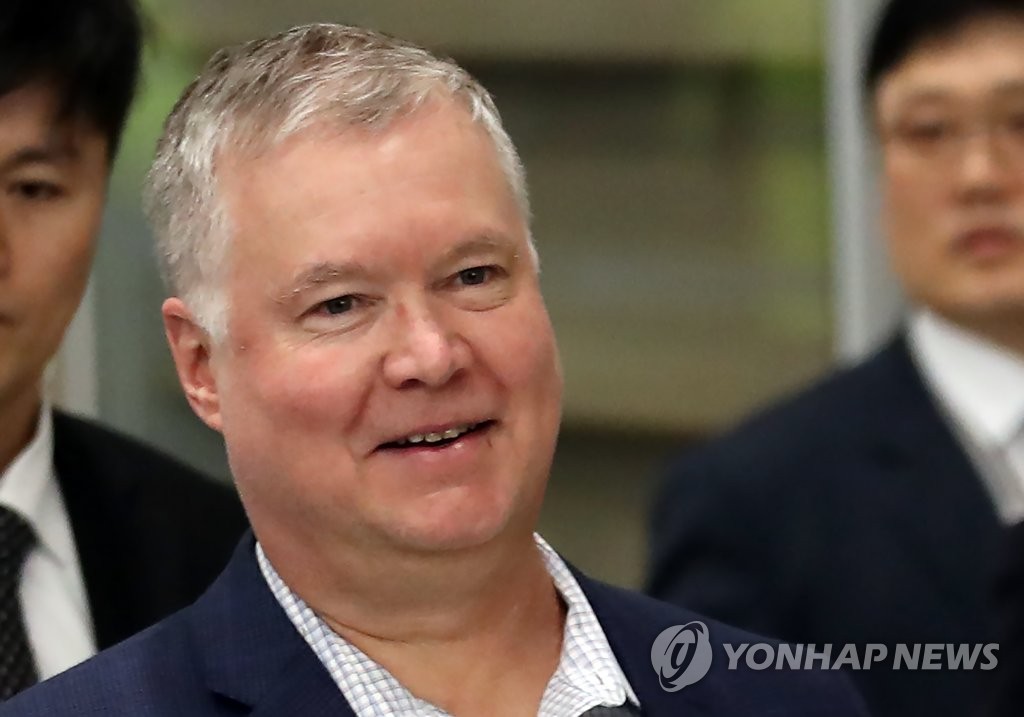 Further aggravating tensions, the North said Saturday that it carried out "another crucial test" at its western Sohae Satellite Launching Station, better known as the Dongchang-ri site, the previous day. It claimed the test will further bolster its "reliable strategic nuclear deterrent."

The test followed an "important" test at the same site on Dec. 7.

Biegun's trip has spawned speculation that he could visit the inter-Korean border truce village of Panmunjom for possible contact with North Koreans. But it remains to be seen whether such contact can materialize amid no signs of either side ceding ground.

On Monday, Biegun will meet his South Korean counterpart, Lee Do-hoon, to discuss how to keep up the momentum for dialogue with the North and make progress in joint efforts to denuclearize it and foster a lasting peace on the peninsula.

The U.S. official also plans to pay a courtesy call on President Moon Jae-in on Monday, according to Moon's office.

It will be the second time Moon has met bilaterally with Biegun -- the first such meeting taking place in September last year just days before Moon's trip to Pyongyang for a summit with North Korean leader Kim Jong-un.

According to Japanese broadcaster NHK on Sunday, Biegun told reporters upon leaving Washington that the U.S. has maintained its stance regarding the denuclearization of North Korea, and the North is also aware of that.

Asked about chances of his meeting with North Korean officials at Panmunjom, he declined to give comment, it added.

The U.S. and the North last held working-level nuclear talks in Sweden in October. But the talks yielded little progress, with the North accusing the U.S. of having come to the negotiating table "empty-handed."

Apparently mindful of Pyongyang's possible military provocations, U.S. President Donald Trump has revived the threat of military action, and even said that North Korean leader Kim Jong-un could lose "everything" if he engages in hostile acts.