SEJONG, Dec. 16 (Yonhap) -- One-person families will likely become the most common household type in all South Korean cities and provinces in the next 30 years amid the country's low birthrate and rapidly aging population, data showed Monday.

Households consisting of a single member are forecast to account for 37.3 percent of all family units in 2047, far outnumbering families of married couples with children, according to the data by Statistics Korea.

The forecast showed that all 17 cities and provincial areas of South Korea will experience demographic changes over the next three decades. 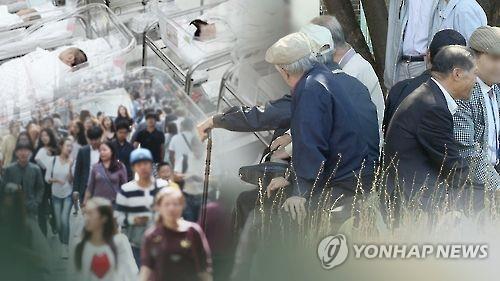 Also, one-member families will account for 37.8 percent of the total in Busan, the country's second-largest city, in 2047, with corresponding numbers for Daegu reaching 36.8 percent.

Single-person households are likely to account for 41.9 percent of all family units in Gangwon Province in 2047, with most of these people being 65 or older.

Last week, Statistics Korea said the nation's population is projected to peak in 2028 at 51.94 million and then go on a downward curve.

The graying of South Korea will accelerate, with the number of elderly people rising to 19 million in 2050, or 39.8 percent of the population.

By 2067, the nation's population is expected to shrink to 39.29 million, according to the data. The number of elderly people is expected to account for 46.5 percent in 2065, compared with about 15 percent for this year.

Single-member households to become most common type in 2047

Single-member households to become most common type in 2047