The move came two months after the operator of popular financial service app Toss applied for a license to set up a new internet-only bank in its second attempt to make inroads into the banking industry.

Earlier this year, the commission rejected applications by the two consortia -- led by Viva Republica and Kiwoom Securities, respectively -- citing a lack of fundraising preparations and technical progress in their business plans.

Kiwoom Securities has since dropped its plan.

Toss Bank is expected to begin operation soon after gaining final approval for the license in the first half of 2021, according to Viva Republica.

"Toss has already become the leading financial super app in Korea. With (the) digital bank license, we will be able to broaden our product offering even, so that we can accelerate our mission to innovate the financial industry," SG Lee, CEO of Viva Republica, said.

Toss provides over 40 financial services including money transfer, financial dashboard, credit score management and payments. Toss has more than 16 million registered users in a country with a population of 51 million. 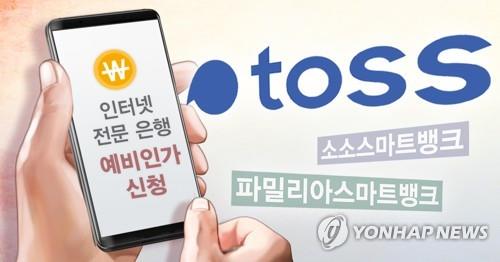 Viva Republica said it holds a 34 percent stake in its consortium, with KEB Hana Bank and the Korean unit of Standard Chartered bank owning stakes of 10 percent and 6.67 percent, respectively.

Viva Republica, one of South Korea's best-known fintech firms, has attracted investments worth US$250 million from investors including PayPal Ventures, the venture capital arm of PayPal, the biggest online payment firm in the U.S.

The approval would set the stage for fierce competition to increase market share in the banking industry in a country where a growing number of people do their banking on their computers or smartphones without visiting bank branches.

Toss Bank "could generate competition and innovation" among other banks, Yoon Chang-ho, director general for the financial industry bureau at the commission, told reporters.

The value of daily money transfers via smartphone apps, such as Toss, Naver Pay and KakaoPay, stood at 200.5 billion won in the January-June period, up 60.7 percent from six months ago, the Bank of Korea said in October.

In 2017, two internet-only banks -- K-Bank and Kakao Bank -- began to offer their services around the clock without face-to-face contact with customers and without brick-and-mortar branches.

Internet-only banks have gained popularity among mobile-savvy customers in recent years, as they offer great convenience to many bank customers who don't have the time to visit lenders during work hours.

The banking transformation has prompted traditional banks to cut commission fees and revamp their online and mobile banking services to try to stay afloat in one of the world's most wired countries.