In the Cheong Wa Dae session, which lasted 35 minutes and had a "very serious" tone, Biegun reaffirmed Washington's resolve not to abandon dialogue with Pyongyang, according to Cheong Wa Dae's deputy spokesman, Han Jung-woo.

Moon took note of Biegun's efforts so far for the denuclearization of the peninsula and establishment of permanence peace.

The president asked him to "make constant effort for progress in the Korean Peninsula peace process," Han said in a press briefing.

Biegun told Moon that "there's no change in (his) thought to do his best to achieve the historic task of establishing denuclearization and peace on the Korean Peninsula, without giving it up," Han added. 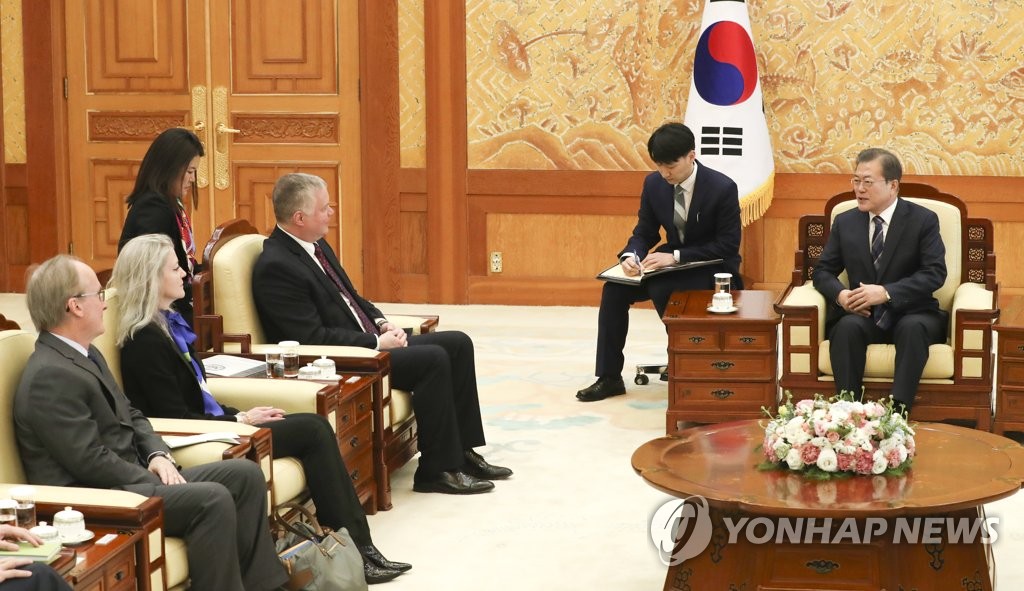 In a separate press briefing later, Han said their talks were held "in a very serious mood."

Moon and Biegun pointed out the "severity of the current situation," in which both optimistic and pessimistic outlooks for negotiations with Pyongyang exist, Han said.

They compared notes and agreed that dialogue and negotiations are the only way to resolve the problem, he said, adding they had "various in-depth" discussions.

It marked the first official meeting between Moon and Biegun in 15 months. They previously had talks in Seoul in September last year not long before Moon's trip to Pyongyang for a summit with the North's leader Kim Jong-un.

Following the meeting with Moon, the U.S. special representative for North Korea sat down with Chung Eui-yong, director of national security at Cheong Wa Dae. Biegun and Chung agreed to maintain "close communication" in connection with the North Korea issue. 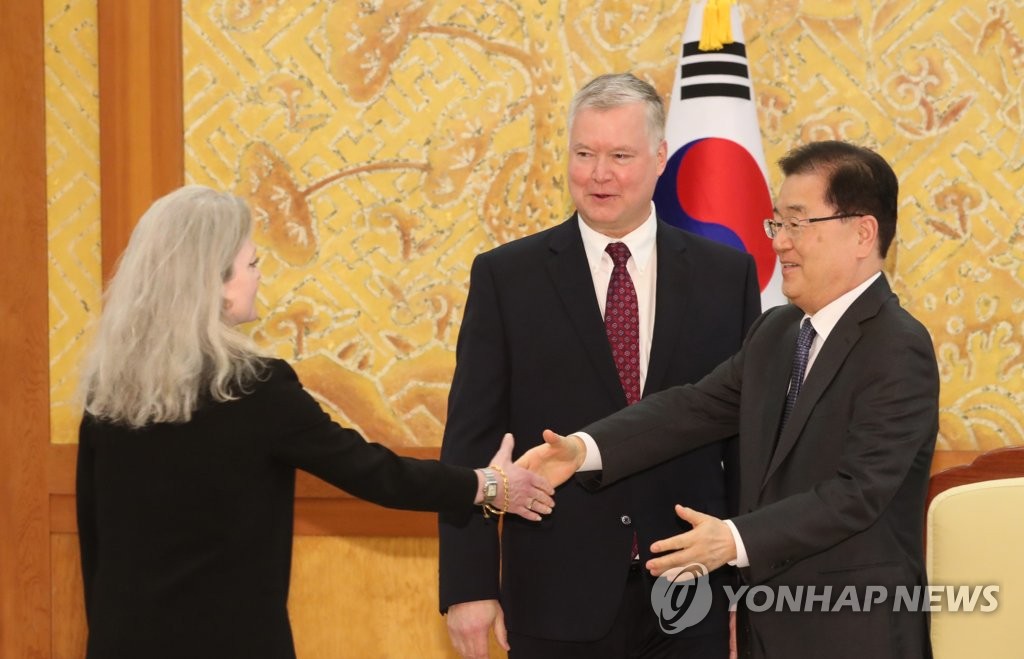 Earlier in the day, Biegun stressed that Washington remains open to bargaining with Pyongyang, saying it has no "deadline" for the resumption of dialogue.

North Korea has stated that it would wait just till the end of this year for the Trump administration to make concessions.

It has apparently been flexing its muscles again with its long-range missile program, which has been mothballed for the past two years. Pyongyang announced a series of successes in "crucial tests" at a long-range rocket test site near the border with China.

Speaking to reporters after consultations with his South Korean counterpart, Lee Do-hoon, Biegun called on the North to return to the bargaining table.

"It is time for us to do our jobs. Let's get this done. We are here, and you know how to reach us," he said.

The message came amid widespread speculation that he may meet North Korean officials at the truce village of Panmunjom during his trip here to last through Tuesday. Cheong Wa Dae officials refused to comment publicly on the possibility.

Biegun has been tapped as deputy secretary of state, and his nomination requires Senate confirmation.