SEOUL, Dec. 16 (Yonhap) -- South Korea's major exporters such as shipbuilders and chipmakers are likely to see their business performances improve next year as eased uncertainties over the Sino-American trade dispute help jack up demand overseas, analysts said on Monday.

Last week, the United States and China announced a much-awaited phase-one deal for their protracted trade war, which has weighed heavily on the global economy since early 2018, although details have not yet been unveiled and there are still lingering uncertainties lying ahead.

The phase-one deal itself is expected to boost orders for South Korean ships and chips that are very susceptible to cycles in the global economy, they said. 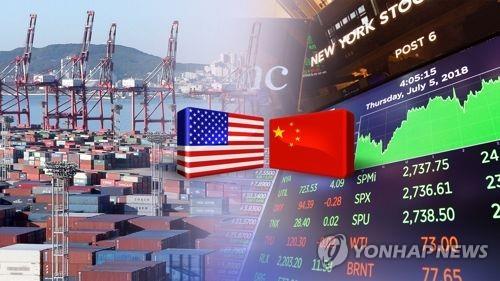 According to market tracker FnGuide, the combined operating profit of local shipbuilders is expected to almost quadruple to some 826 billion won (US$707.7 billion) in 2020 compared to this year's 212.6 billion won.

For one, Hyundai Mipo Dockyard Co.'s operating income is expected to increase 15.8 percent next year, and its bigger rival Samsung Heavy Industries Co. is likely to swing to the black.

During the same period, Samsung Heavy Industries' net losses widened to 583.2 billion won, more than a sevenfold increase from a year earlier.

According to FnGuide, the combined operating profits of South Korean chipmakers are estimated to more than double next year.

"The phase-one deal between the U.S. and China will not only improve the investor sentiment but also speed up the economic momentum, such as in consumption, manufacturing and investment," Samsung Securities researcher Yoo Seung-min said.

In the quarterly report, Samsung said the lingering uncertainties in the global market could pose risks to an increase in demand.

SK hynix, the country's second-largest chipmaker, also suffered a major setback in the third quarter of the year, down 93 percent to 472.6 billion won, the lowest since the second quarter of 2016.

Shipbuilders, chipmakers tipped to turn around in 2020: analysts

Shipbuilders, chipmakers tipped to turn around in 2020: analysts