SEOUL, Dec. 16 (Yonhap) -- The defense ministers of South Korea and the United Arab Emirates (UAE) agreed Monday to strengthen cooperation for peace on the Korean Peninsula and in the Middle East, the defense ministry here said.

South Korean Defense Minister Jeong Kyeong-doo and his UAE counterpart, Mohammad Ahmed Al Bowardi, made the pledge during their meeting in Seoul earlier in the day.

"Minister Jeong explained the government's efforts for the denuclearization of the Korean Peninsula and the establishment of a peace regime in Northeast Asia, and asked for the UAE's support and cooperation," the ministry said in a release.

Vowing continued backing for those efforts, the UAE defense chief also sought Seoul's continued concern for a peaceful resolution of problems in the Middle East, it added.

Tensions have been heightened on the peninsula amid growing concern that North Korea could resume launches of inter-continental ballistic missiles (ICBMs) amid stalled nuclear negotiations with the United States.

In the highly volatile Strait of Hormuz, the U.S. formed an international military coalition of the International Maritime Security Construct (IMSC), where a handful of its allies have joined, including the UAE, amid tensions with Iran.

South Korea has said it, at Washington's request, has been reviewing diverse options to protect its people and vessels using the strategic sea lane and to contribute to the international efforts.

Media have speculated that those options would include sending a liaison officer or expanding the scope of operations by its Cheonghae Unit, which currently conducts anti-piracy missions in waters off Somalia.

During the talks, the two sides also agreed to further enhance cooperation in intelligence, cybersecurity and munitions fields through such ways as joint research and exchanges of technologies, according to the ministry. 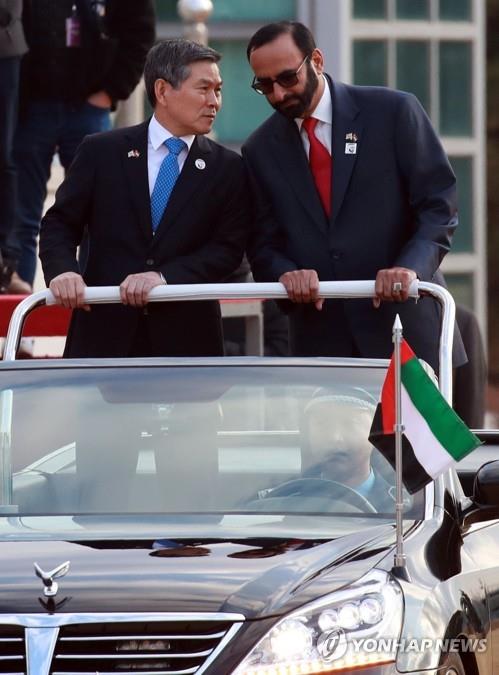