The Korea Institute for Defense Analyses (KIDA) made the case in a report on the security outlook for next year, saying that if the nuclear talks break down, Pyongyang is expected to focus its efforts on demonstrating its retaliatory capabilities to fend off U.S. military pressure.

The negotiations between the U.S. and North Korea have made little progress since the breakdown of the second summit between their leaders in Hanoi in February. The North has threatened to take a new way other than dialogue, if the U.S. misses the year-end deadline it set for Washington to come up with new proposals.

"If the talks fall apart, chances are that the North Korean authorities could make such efforts for the development of submarine-launched ballistic missiles (SLBMs) and multi-warhead ICBMs," according to the report.

Though experts have speculated about attempts by the North to build multi-warhead missiles, South Korean defense authorities have not officially mentioned such possibilities so far.

ICBMs that can carry multiple warheads are much harder to intercept, as they get separated in mid-air to strike their targets. The Dong Feng 41 of China's multi-warhead nuclear strike weapon is believed to carry around six to 10 warheads, and the U.S.' LGM-30 Minuteman III ICBM is capable of carrying three warheads.

In order to evade additional sanctions and tougher U.S. actions, however, Pyongyang appears to "delve itself into the development of a new submarine and its Pukguksong-3 SLBM or carry out long-range rocket tests first by launching a satellite," the think tank added.

On Dec. 7 and last Friday, North Korea is believed to have conducted engine tests for long-range rockets at the Sohae Satellite Launching Station, or the Dongchang-ri site. The rockets are feared to be used for launching satellites or ICBMs. 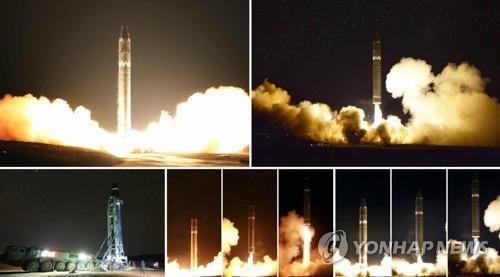