Earlier in the day, the finance ministry and related government agencies came up with the toughest steps ever to rein in a rise in housing prices. The steps unveiled include stricter lending rules for home purchases, expanded adoption of a presale price cap for newly built apartments and a hike in property taxes on multiple homeowners.

"The government will take stronger steps next year should home prices not stabilize with today's measures," Finance Minister Hong Nam-ki said in a press briefing.

More specifically, mortgage loans will be banned when buying a house worth over 1.5 billion won (US$1.3 million) in "speculative and overheated speculative" areas starting Tuesday, and the loan-to-value (LTV) ratio for the purchase of a home valued from 900 million won to 1.5 billion won will be cut to 20 percent from the current 40 percent, according to the finance ministry. 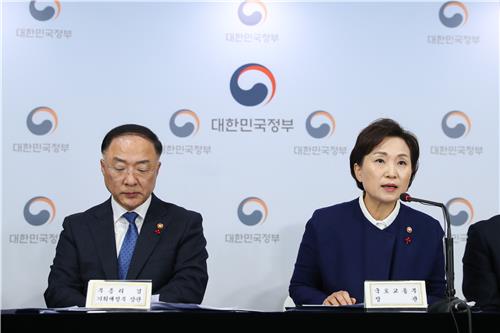 "Transactions of homes worth over 900 million won in the affluent Gangnam areas in southern Seoul jumped to 50 percent of total deals (in Seoul) after July from mid-20 percent early this year," the minister said.

The latest measures are part of the fourth comprehensive plan to clamp down on speculative transactions in the real estate market. The three previous ones were announced in June and August 2017 and in September last year.

The pace of growth in home prices appeared to be slowing down until August this year due to the regulations on loans, presale prices and multiple homeowners.

But the home prices were further buoyed by the "presale price cap system."

In October, Seoul revised related laws to execute the presale price cap system for apartments to be built by private builders amid signs of escalating home prices.

The government initially applied the price cap system last month to a combined 27 areas of four affluent Gangnam districts in southern Seoul and four districts in northern Seoul to stabilize the housing markets.

Hong said that there are signs of "overheating" in home prices in Seoul and neighboring areas, driven by speculative investment in high-price homes.

"The bigger problem is that such overheating may swiftly spread to other neighboring areas," the minister said.

The government is closely monitoring the effect of the fresh property measures and could take additional steps to rein in speculators in the first half of next year, he said.

The price cap system is widely seen as the strongest measure ever taken by the government to clamp down on housing prices.

Last but not least, the government will raise the comprehensive real estate tax rate for owners of high-priced homes and multiple homeowners and plans to impose heavier transfer taxes on the sale of homes in which multiple homeowners do not reside, the land ministry said.

If multiple homeowners sell a house they have owned for more than 10 years, they will be exempt from heavier transfer tax until the end of June next year, it said.

The finance ministry said earlier it would seek to raise the taxable rate of a property, which is now 80 percent of the government-set value. The rate should climb to 100 percent by 2022, compared with the originally proposed 90 percent by 2020. In South Korea, the government usually taxes land and homes based on its annual assessment value instead of the actual market value.

The comprehensive real estate tax, first introduced in 2005 under the Roh administration, has long been controversial here. Taxation on owners of expensive houses and owners of multiple homes during the Roh administration faced a strong backlash, which in turn led to a drop in the approval rating of the left-of-center government.

The conservative Lee Myung-bak government eased the tax scheme. But the liberal Moon Jae-in government, which shares most of the economic policies of the Roh administration, has vowed to impose heavy taxes on owners of high-priced homes and multiple homes, which it claims is the main cause of soaring home prices in Asia's fourth-largest economy. 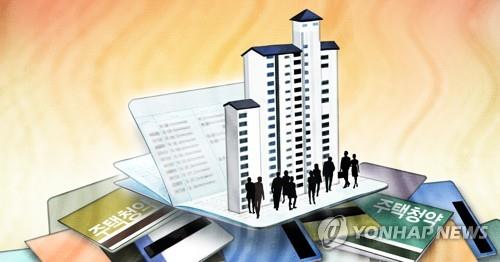 Cheong Wa Dae "advised" its senior officials to "actively participate in" efforts to stabilize the housing market in Seoul and Gyeonggi Province.

The presidential chief of staff, Noh Young-min, sent the message to Cheong Wa Dae officials with the rank of secretary and higher, advising them to sell their homes in the metropolitan areas, except for one, at an early date unless there's an unavoidable reason not to, according to Yoon Do-han, senior secretary for public communication.

He stressed that it's not an "instruction" but a sort of request.

Noh was quoted as emphasizing that it's necessary for ranking Cheong Wa Dae officials to set an example first themselves in connection with the government's initiative to stabilize the market.

His move came amid media-driven criticism that the value of apartments and other properties owned by a number of Cheong Wa Dae officials has soared amid sharp hikes in home prices since the launch of the Moon Jae-in administration.

Yoon said about a dozen senior Cheong Wa Dae officials have two or more houses in Seoul and Gyeonggi Province cities, most of which are subject to regulations on curbing property speculation.