SEOUL, Dec. 16 (Yonhap) -- Defense Minster Jeong Kyeong-doo called Monday for thorough preparations ahead of a capability test next year aimed at checking if South Korea is ready to retake wartime operational control of its forces (OPCON) from the United States.

Jeong made the remarks as he presided over a meeting, attended by some 150 senior officers of the Joint Chiefs of Staff and three branches of service, to review this year's progress regarding the OPCON transfer and to check related tasks for next year.

"The assessment of our military's Full Operational Capability (FOC) for the future joint command is the most important task for us next year," Jeong said, stressing the need to be prepared thoroughly for the successful implementation of the test.

The allies have been working for the conditions-based OPCON transfer of South Korean forces from Washington to Seoul. No specific deadline has been set, though many see the two sides eyeing 2022, or thereabout, as the target date.

In order to verify whether Seoul is on course to meet the conditions for the transition, the allies in August carried out an initial operational capability (IOC) test.

After reviewing its results during their meeting in Seoul last month, Jeong and his U.S. counterpart Mark Esper decided to move on to the next step of carrying out the FOC test, according to the defense ministry.

Pointing to notable progress this year for the goal, such as the allies' agreement to name a separate Korean four-star general to lead their future Combined Forces Command (CFC), Jeong said the OPCON transfer "should be pushed systematically and proactively in a way to further enhance the Korea-U.S. alliance and joint combined defense posture."

South Korea handed over operational control of its troops to the U.S.-led U.N. command during the 1950-53 Korean War. It retook peacetime OPCON in 1994, but wartime OPCON remains in the hands of the U.S.

The right conditions required to be created before the OPCON transfer are South Korea's capabilities to lead the allies' combined defense mechanism, its capacity for initial responses to the North's nuclear and missile threats and a stable security environment on the peninsula and in the region. 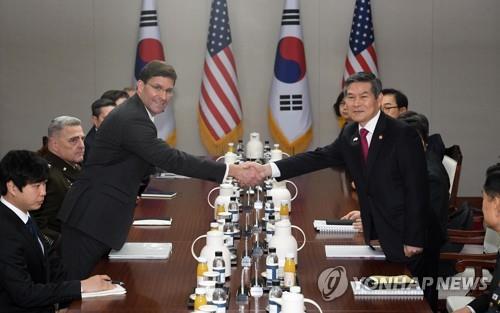