The ceremony, which took place at the 17th Fighter Wing base in the central city of Cheongju, was closed to the press in an apparent effort to keep it a low-profile event to avoid angering Pyongyang, which has strongly bristled at the introduction of such state-of-the-art weapons as a sign of hostility.

South Korea has so far brought in 13 F-35As, beginning with two in late March, under a plan to deploy 40 fifth-generation jets through 2021. Holding the fielding ceremony means that the military declared initial operating capability for the first batch of the fifth-generation fighters, as they are ready for limited combat deployment.

Air Force Chief of Staff Gen. Won In-choul presided over the indoor ceremony that did not include any flying display by the new fighters. Critics have accused the government of handling the matter in a low-key manner as it minds North Korea too much.

"We believe that the asset has been fully publicized through such events as the Armed Forces Day event and the Seoul International Aerospace & Defense Exhibition (in October)," Lt. Col. Colonel Cho Se-young said at a regular briefing, adding that the event was meant to recognize related officers and help raise their pride.

The ceremony took place at a time when tensions are heightened on the Korean Peninsula, with growing concern over North Korea's possible resumption of firing long-range missiles amid stalled denuclearization talks between Washington and Pyongyang.

The regime has carried out a total of 13 rounds of major weapons tests so far this year involving ballistic missiles, but it has not launched long-range ones. This month, however, it carried out apparent rocket engine tests twice at its western satellite launching site.

The North has threatened to take a new way if the United States fails to come up with new proposals by the end of this year to break the current stalemate.

On Monday, U.S. Special envoy for North Korea Stephen Biegun called on the North to return to dialogue, but Pyongyang has remained mum. 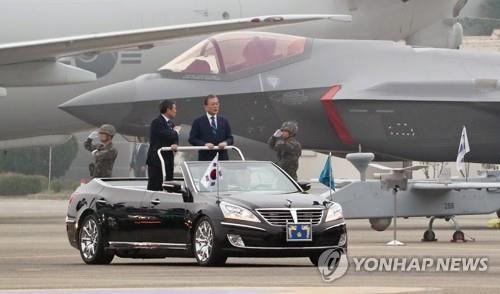