BTS' latest album, "Map of the Soul: Persona," sold more than 3.69 million copies since its release in April, topping the album sales category of the Gaon Music Chart compiled by the Korea Music Content Association. The album chart covers the period from Jan. 1 to Dec. 7.

It marks overriding chart dominance by BTS following the band's No. 1 on the same chart last year. 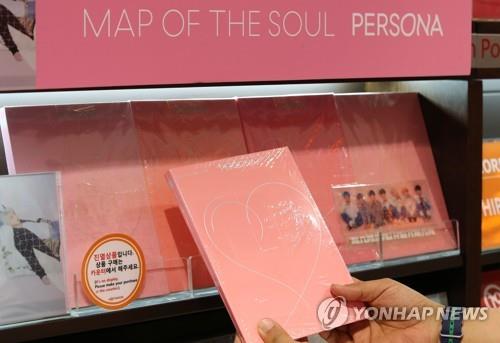 Boy band Seventeen came second on the 2019 album sales chart with sales of 849,282 copies of its third full-length album, "An Ode," dropped in September.

The fifth spot again came to BTS for its "BTS World" OST album, which sold 553,376 copies.

"Driven by sales of BTS albums, the annual sales of (physical) albums are growing every year," Choi Tae-young, an official at the association, said, referring to the trend of increasing CD sales attributable to popular idol boy bands.

TWICE was the only female music act on the 2019 album sales chart, coming tenth with the "Feel Special" album that sold 406,434 copies.

British singer-songwriter Anne-Marie's "2002," meanwhile, topped the Gaon digital song chart for 2019 during the same period, the first ever non-Korean song to top the chart in its near 20-year history, according to the chart results.

The second spot went to Lim Jae-hyun's "If There was Practice in Love," followed by "The Day was Beautiful" by Kassy.