SEOUL, Dec. 17 (Yonhap) -- Some members of the central bank's rate-setting board see the need for additional steps to boost the country's economic growth and consumer price hikes down the road, minutes from the board's latest meeting showed Tuesday, indicating a possible rate cut in the near future.

According to the minutes from the latest meeting of the Bank of Korea (BOK) monetary policy board, at least three members of the seven-member board expressed concerns over the country's slowing growth and low consumer price growth.

The central bank earlier said the board had voted 6-1 to keep the base interest rate frozen at 1.25 percent in its eighth and final rate-setting meeting of the year on Nov. 29.

"(The country) continues to face slow growth and low inflation due to a slump in global trade, and such a growth trend and price increases are expected to continue into next year," a board member said, calling for a quarter percentage point rate cut. 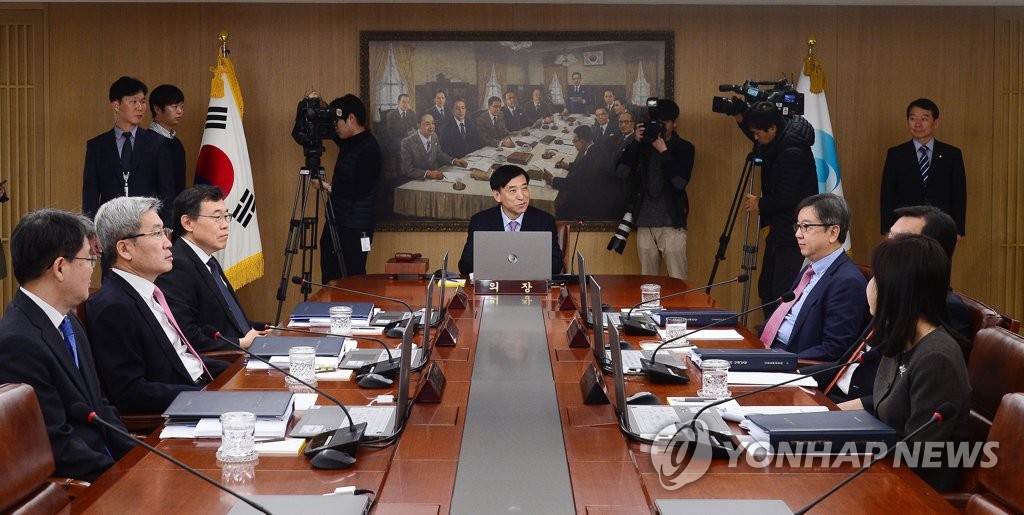 "Given the current outlook on consumer prices, the actual rate presented by the base rate cannot be said to be lower than the neutral rate despite two rate cuts, which makes it difficult to say the current monetary policy is accommodative enough," Shin told the meeting, according to the minutes.

On the same day the BOK board kept the base rate frozen, the central bank slashed its outlook on consumer price increase to 0.4 percent for this year, down 0.3 percentage point from its earlier estimate.

It also slashed its 2019 growth outlook to 2 percent from the 2.2 percent forecast in July.

Another board member noted it may be necessary to further reduce the policy rate to accommodate the local economy but they would vote for a rate freeze in November only to first see the effect of two rate cuts each in July and October.

"Considering such a low increase in consumer prices, the base rate, which currently sits at 1.25 percent, cannot be considered accommodative enough, and it seems it may be necessary to reduce the base rate in accordance with current macroeconomic conditions," the board member was quoted as saying.

"However, I wish to postpone the time of a rate cut to the next meeting out of respect for the statement on the monetary policy decision from the last monetary policy board meeting, which said it will watch the effect of the two previous rate cuts," the board member added.

A third board member also highlighted the need to additionally support the local economy in the future.

"The slowdown in our economic growth this year was largely caused by global economic factors. An expected global recovery next year, especially in the semiconductor sector, may have a positive impact on our exports and facility investment, but uncertainties from various issues such as the prolonged trade dispute between the U.S. and China, the slowing economic growth of China and trade disputes between the U.S. and EU may not easily be removed, making it hard to expect a significant recovery for our economy," the board member said.

"Conditions for consumer prices may improve from those of this year, but it is feared that consumer prices increase will fall short of the inflation target," the member added.

Others voiced the need to keep the key rate frozen for some time, insisting the two previous rate cuts this year have led to a large increase in market liquidity and that the country's policy rate may already be nearing its lower boundary.

The country's base rate is already lower than that of the U.S., which currently sits in a range of 1.50 percent to 1.75 percent.

The BOK chief has noted a wider gap between the interest rates of South Korea and other major economies may trigger a capital outflow, undermining the country's overall financial stability.