SEOUL, Dec. 17 (Yonhap) -- South Korea's chief financial regulator on Tuesday warned of a home price bubble, a day after the government unveiled the toughest steps ever to rein in a rise in housing prices.

"It's a matter of time until house prices fall sharply, though it is not clear whether the decline will occur in the next five or 10 years," Financial Services Commission Chairman Eun Sung-soo said in a meeting with reporters.

Eun made the case that the housing bubble will pop, questioning how home prices can keep rising amid the growth of one-person families.

Households consisting of a single member are forecast to account for 37.3 percent of all family units in South Korea in 2047, up from 29.3 percent in 2018, according to Statistics Korea. 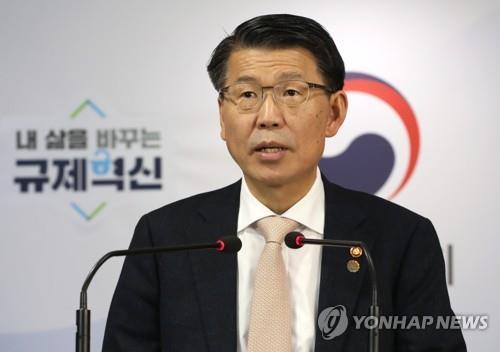 On Monday, the government imposed stricter lending rules for home purchases, expanded adoption of a presale price cap for newly built apartments and a hike in property taxes on multiple homeowners.

Mortgage loans will be banned when buying a house worth over 1.5 billion won (US$1.3 million) in "speculative and overheated speculative" areas starting Tuesday, and the loan-to-value ratio for the purchase of a home valued from 900 million won to 1.5 billion won will be cut to 20 percent from the current 40 percent, according to the government.

Housing prices in South Korea have been on the rise in recent years, spurring policymakers to roll out a series of measures, including tightened home-backed loan regulations and hefty taxation, to cool down home prices.

On Monday, South Korea's presidential office "advised" its senior officials to sell their homes in metropolitan areas, except for one, at an early date unless there's an unavoidable reason not to.

Eun said that he has made a call to his tenant who lives in his apartment in Sejong City to inform the tenant that he will sell his home in the administrative hub, located about 130 kilometers southeast of Seoul. Eun has another home in Seoul.