SEOUL, Dec. 18 (Yonhap) -- South Korea has been reviewing various options, including troop dispatch, as to what role it can play to safeguard the Strait of Hormuz, officials said Wednesday.

Amid tensions with Iran, the U.S. has asked its allies to join a military coalition to secure the strategic waters, and South Korea also received such calls "both directly and indirectly" from Washington, according to the defense ministry.

Last week, Cheong Wa Dae said that the National Security Council (NSC) held a standing committee meeting and discussed ways to protect South Korean people and vessels in the vicinity of the Strait of Hormuz and contribute to international efforts to ensure maritime security there.

Observers say one of the most probable options for South Korea appears to be broadening operational areas of its Cheonghae Unit, which is on an anti-piracy mission in the Gulf of Aden off Somalia.

The 31st batch of the Cheonghae Unit is scheduled to depart the southern port city of Busan next month for the Gulf of Aden on a six-month mission starting in February, according to the Navy.

The Gulf of Aden is around four days' sail from the Strait of Hormuz. Earlier this month, the National Assembly passed a motion to extend its mission, which started in 2009, through the end of next year.

"As long as we do not add additional forces or weapons, expanding Cheonghae's role to the Strait of Hormuz would not require parliamentary consent, as law stipulates that the unit shall carry out missions in the Gulf of Aden and its surrounding regions," a government official said, adding that related agencies have carried out legal reviews into various scenarios.

The Navy has been preparing to send the new batch of the 300-strong contingent along with the 4,400-ton destroyer, the Wang Geon, which is "a traditional formation of the unit," a Navy officer noted.

According to a report by local daily Joongang Ilbo on Wednesday, the Seoul government decided to send troops to the strategic waters early next year, and it told the U.S. side that it would first send a liaison officer to the U.S.-led international military coalition of the International Maritime Security Construct (IMSC) in January.

"A variety of options are on the table, and nothing has been fixed," another official said. But he added, "It would be commonsensical that a government sends officers first before any troops dispatch."

Currently, four South Korean naval officers work for the U.S.-led Combined Maritime Forces (CMF) headquarters, and both the IMSC and CMF are headquartered in Bahrain.

"The possible troops dispatch would help strengthen the Korea-U.S. alliance under crucial security circumstances of the date and serve as a bargaining chip for us in the defense cost-sharing deal," Kim Yeoul-soo, an expert from the Korea Institute for Military Affairs, said.

Seoul and Washington have been negotiating the Special Measures Agreement (SMA) on their sharing of the cost for the upkeep of American troops here. Washington has reportedly demanded a drastic increase in Seoul's payments to $5 billion next year. Under this year's SMA, Seoul agreed to pay about $870 million. The fifth round of talks began on Tuesday through Wednesday.

As the world's most important oil passageway that forms a choke point between the Arabian Gulf and the Gulf of Oman, the strait is the route to the open ocean for more than one-sixth of global oil production and some 70 percent of South Korea's oil imports. 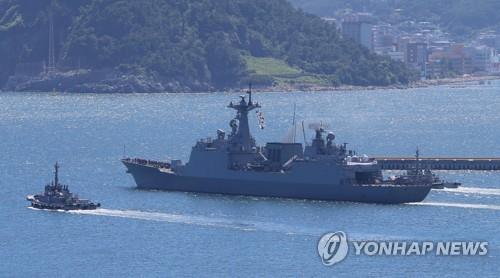