The summit plan raises expectations for a possible breakthrough in efforts to end a monthslong trade fight between the two sides. The trade spat is attributable to deepened disputes over a historical issue.

Abe earlier broke the news, saying publicly that he will attend the three-way summit in the southwestern Chinese city of Chengdu on the Christmas Eve and meet bilaterally with Moon there.

Moon's office announced his schedule for a two-day trip to China from Dec. 23 for the session to be hosted by Chinese Premier Li Keqiang. Formally, however, it had not disclosed whether Moon would hold a separate summit with Abe on the sidelines. 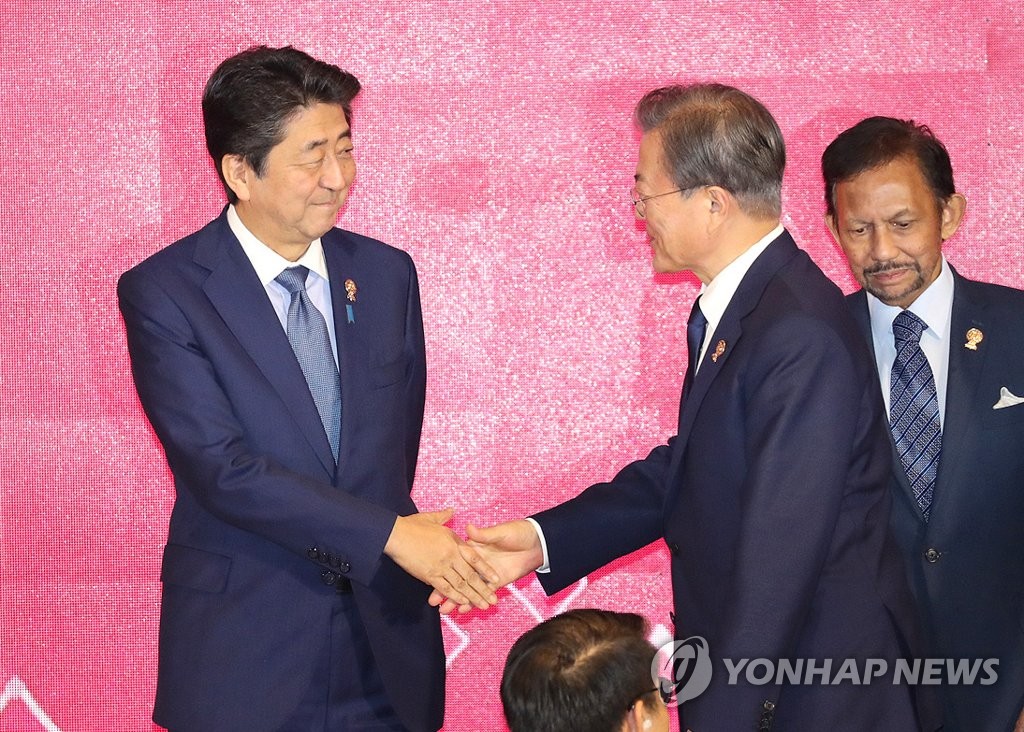 Asked about Abe's related comments, a Cheong Wa Dae official told reporters, "With regard to that, you can regard it as true."

Cheong Wa Dae will make an announcement as soon as consultations are finalized on such details as the exact time and venue, the official added, speaking at a background briefing.

Moon and Abe had their previous summit in New York in September last year on their trips there for the United Nations General Assembly session.

Relations between the neighboring countries have deteriorated since Tokyo introduced stricter controls on exports to South Korea in early July. It then removed South Korea from the "whitelist" of trusted trade partners. It is apparently protesting South Korea's handling of the issue of compensation for Koreans who did forced labor for Japanese companies during World War II.

Seoul decided to terminate an accord with Japan on sharing military information. But it put the implementation of the measure on hold as the two sides agreed to launch working-level dialogue on the trade issue.

In November, Moon and Abe had a brief "impromptu" bilateral meeting in Bangkok just ahead of the ASEAN Plus Three summit.

Moon may make a stopover in Beijing on his way to or back from Chengdu for a summit with President Xi Jinping.

Moon to hold bilateral summit with Abe in China next week

Moon to hold bilateral summit with Abe in China next week