SEJONG, Dec. 19 (Yonhap) -- South Korea's economic growth is expected to rebound in the coming year, helped by a global economic recovery and an anticipated upturn in the memory chip market, and the government seeks to add further recovery momentum by invigorating investment and creating more jobs.

Easing trade tension between the United States and China and increasing monetary support around the world are likely to lift the global economy, and global demand for memory chips will pick up early next year, Vice Finance Minister Kim Yong-beom told reporters.

However, future trade negotiations between the U.S. and China, the fate of Britain's exit from the European Union and the slowdown in the Chinese economy will provide causes for pessimism for the South Korean economy next year, Kim said.

"In 2020, opportunities coexist with risks. The government will spare no efforts to build momentum for an economic recovery next year," Kim said. 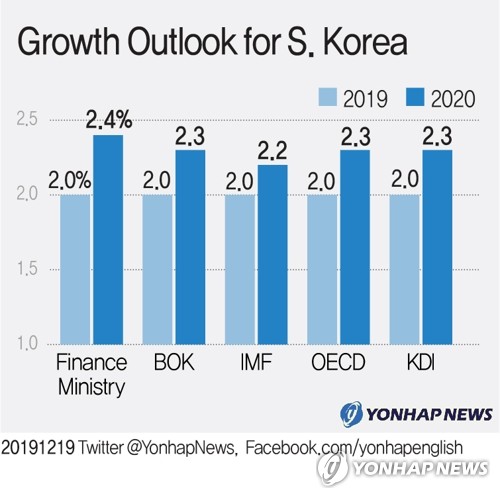 "Top priority will be given to invigorating investment to help boost economic growth and strengthen growth potential," the ministry said in a statement, adding that the government will seek "bold deregulation" next year to spur corporate investment.

As part of the government's initiative to boost the economy through investment, state-run institutions will expand next year's investment to 60 trillion won (US$51.4 billion), up from 55 trillion won this year.

As part of efforts to help their financing, the government will provide financial support worth more than 10 trillion won, including 4.5 trillion won worth of low-rate loans, for facility investment.

The South Korean economy, which expanded 2.7 percent in 2018, has been on a weaker growth track this year, hit by the escalating trade war between the U.S. and China, which reached a partial truce last week. About 40 percent of South Korea's exports go to the U.S. and China -- the country's top two trading partners and the world's two largest economies.

Exports fell 14.3 percent in November from a year earlier, extending their slump to a 12th consecutive month. The November figures marked the longest drop since the 19-month decrease from January 2015 to July 2016.

By segment, exports of semiconductors remained weak in November, nose-diving 30.8 percent to $7.39 billion, taking up roughly 15 percent of the total outbound shipments.

Officials said the dull performance of chips was attributable to the delayed recovery in the price of memory chips, along with the falling seasonal demand for tech products. 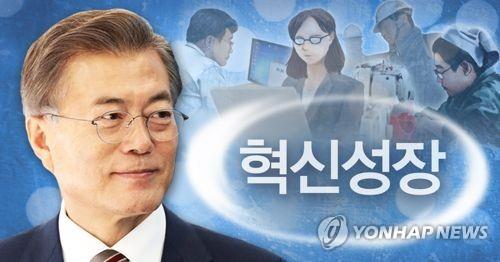 The ministry expected exports to grow 3 percent next year, a modest rebound from this year's estimated 10.6 percent contraction.

"Exports of semiconductors will recover on rising demand, and overseas sales of ships are also expected to rebound next year," the ministry said.

The 2020 current account surplus is forecast to widen to $80.8 billion from this year's estimate of $75.1 billion, as services and income account deficits narrow.

Facility investment, which is expected to shrink 7.7 percent this year, is likely to grow 2.1 percent next year after the government pledged a package of policy support for corporate investment.

Still, construction investment is expected to decline 2.4 percent next year amid the government's move to rein in rising home prices.

Next year's annual inflation target is set at 1 percent, compared with this year's estimate of 0.4 percent and 1.5 percent growth in 2018.

Sparking fears of deflation, the nation's economy reported its first-ever negative inflation rate in September and zero growth in October.

Bank of Korea (BOK) Gov. Lee Ju-yeol told reporters this week that the country is not facing any immediate danger of deflation, with its inflation rate expected to accelerate from next year, albeit at a mild pace.

"It is true that there now exist concerns of deflation as the country's consumer price growth has greatly slowed while its inflationary expectation also dropped," Lee said.

The BOK slashed its policy rate twice this year -- to 1.50 percent in July and to 1.25 percent in October, matching the previous all-time low seen in 2016.

Many analysts believe that the BOK could again slash the policy rate early next year unless the economy shows signs of a recovery.

Lee also hinted at a possible rate cut down the road, saying, "Since I said we will maintain the monetary policy easing stance, I have repeatedly stressed the possibility of additional easing." 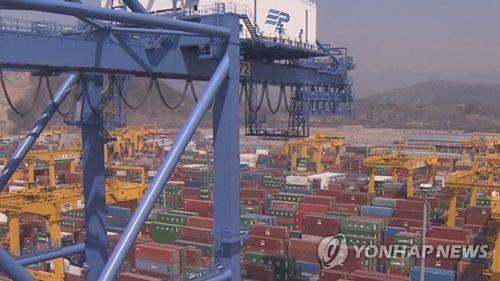 Although the prospects for a recovery in global markets for memory chips, South Korea's key export item, depend heavily on the health of the worldwide economy, analysts said chip demand has bottomed out.

"We upgraded Korea and Taiwan from underweight to market weight at the start of third quarter this year, largely on expectations that earnings downgrades are likely to trough and (the) market could start pricing in a recovery in tech hardware earnings next year," Goldman Sachs Group Inc. said in a recent report.

"While both markets performed strongly in the second half, we raise Korea to overweight on expected global cyclical upturn and further recovery in semiconductor earnings," it said.