SEOUL, Dec. 18 (Yonhap) -- South Korea will extend the maximum period of stay for seasonal migrant workers on Tuesday from the current three months to five months to tackle chronic labor shortages in its agricultural and fisheries sectors, the Ministry of Justice said Wednesday.

Under the current law, foreign seasonal workers invited by agricultural and fishing businesses can enter the country on a C-4 visa, which allows a stay of up to 90 days. 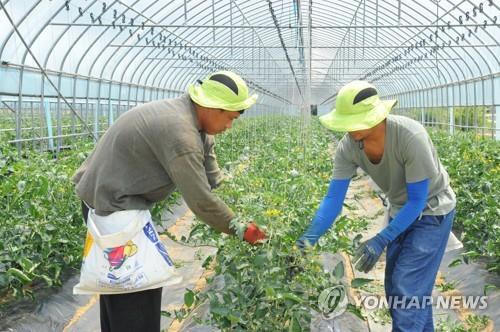 But the government has revised the immigration law to issue a new type of E-8 visa to seasonal migrant workers, permitting them to stay here for up to five months for temporary farming and fishing work.

The revised Enforcement Decree of the Immigration Act was approved by a Cabinet meeting on Tuesday. The legal revision came after many farm and fishing business owners complained that 90 days is not enough for some types of work.

Following the revision, local farming and fishing communities will be able to choose between C-4 and E-8 visas for their seasonal migrant workers beginning next year, ministry officials said.

The justice ministry plans to finalize next year's basic plan for foreign seasonal workers on the basis of the revised law and complete their assignments by February.

"Under the current system, the actual labor period of seasonal migrant workers is limited, excluding their period of adjustment and departure preparations. But the new visa system is expected to resolve such difficulties," a ministry official said.

On Monday, the ministry hosted an expo to support the signing of MOUs on seasonal labor supply between agricultural and fishing communities nationwide and foreign embassies in Seoul.