SEOUL, Dec. 19 (Yonhap) -- Mount Paekdu is the highest peak on the Korean Peninsula, located along the North Korea-China border. Its historic eruption in the 10th century, known as the "Millennium Eruption," was one of the most powerful in recorded history, with its ashes flying even to northern Japan.

Recently, geologists and volcanologists both at home and abroad have warned of a possible enormous explosion of the 2,744-meter volcano. They say that the unprecedentedly massive eruption could cause a series of earthquakes and tsunamis that could engulf more than half of South Korea.

The latest big-budget disaster movie, "Ashfall," which was released on Thursday, dramatizes the realization of the warning with overwhelming scale and a star-studded cast.

It starts with breathtaking scenes in which downtown areas of Seoul suddenly turn into ruins due to a huge blast of Mount Paekdu. The experts predict three more explosions to come in a few days, with the last one expected to blow up the entire Korean Peninsula.

To prevent another disaster, the Seoul government plans an operation based on a theory by Prof. Kang Bong-rae (Ma Dong-seok), who suggests the pressure of a huge magma chamber beneath the volcano be reduced by using a North Korean nuclear explosive. 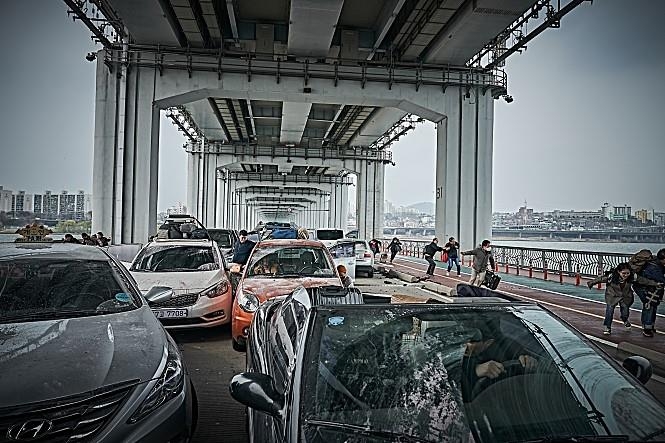 Jo In-chang (Ha Jung-woo), the captain of an explosive ordnance disposal team, is assigned to take part in the operation and secretly sent to North Korea. He has to contact Lee Joon-pyeong (Lee Byung-hun), a former North Korean spy who knows the whereabouts of the North Korean nuclear explosive, and carry it to Mount Paekdu no matter the hazards.

Despite getting along as poorly as cats and dogs, In-chang and Joon-pyeong team up and start their journey to the northern tip of the peninsula, but they each have something different in mind.

"Ashfall," co-directed by Lee Hae-jun and Kim Byung-seo, is one of the most anticipated films of 2019 for its production house, Dexter Studios, which is behind the smash hit series "Along With the Gods," and for its all-star cast including Lee, Ha, Ma and singer-turned-actress Bae Suzy.

An estimated 26 billion won (US$22.3 million) was reportedly funneled into the production of the Hollywood-style disaster film. Its computer-generated visual effects of the volcanic explosion and urban destruction make the disaster more realistic and valid.

Scenes like the first eruption of Mount Paekdu, collapses of skyscrapers in Seoul and car stunt action are so lifelike and intriguing as to keep viewers on the edge of their seats from the beginning of the movie. 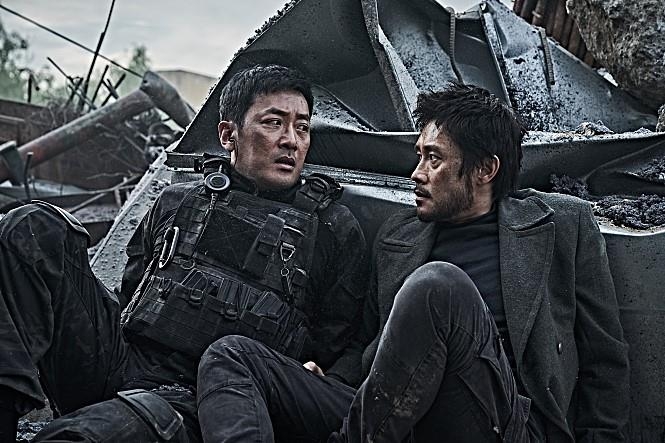 The film also focuses on the collaboration and friendship of the two officers from the South and North, portrayed by veteran actors Lee and Ha, respectively.

Lee, who chose his first silver screen project in almost two years since his last comedy film "Keys to the Heart," proves why he deserves to be one of the most sought-after actors in South Korea for his timeless acting with sophisticated emotions and humor, along with brilliant action scenes.

At the same time, Ha's spontaneous performance as a smart but clumsy leader creates good on-screen chemistry with Lee, although it is the first time that the two most bankable male stars in the South Korean film industry have starred in the same film together.

Filled with all of the tropes and clichés of a disaster film, the storyline is corny and formulaic, resembling a stereotypical Hollywood movie.

But its magnificent spectacles of quality visual effects and acting ensemble of big-name stars seem to stand out in the fierce battle for the Christmas season box office against the comedy "Start-up", released on Wednesday, and the historical film "Forbidden Dream" to be released next week.

"Ashfall" topped the South Korean box office on Thursday, its opening day, with the number of presale tickets reaching nearly 290,000 as of 1:30 p.m. 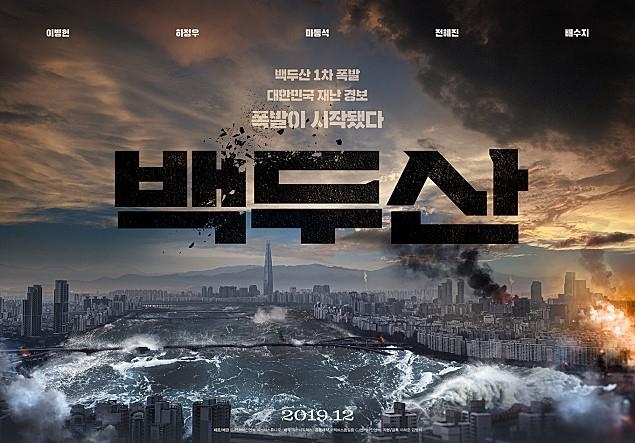