SEOUL, Dec. 19 (Yonhap) -- The United States flew a naval surveillance plane over the Korean Peninsula on Thursday, an aviation tracker has said, amid tensions over the possibility of North Korea launching a long-range rocket in protest over the stalemate in the countries' nuclear talks.

According to Aircraft Spots, a U.S. Navy EP-3E plane conducted the reconnaissance mission, just a week after a similar flight by a U.S. Air Force RC-135S Cobra Ball aircraft.

The U.S. military has been closely watching North Korean military movements as Pyongyang has threatened to embark on a "new way" if Washington does not meet its year-end deadline to make concessions in the hitherto unproductive nuclear negotiations.

Pyongyang has said that the deadline is drawing near and that it is entirely up to Washington to decide what "Christmas gift" it would get -- remarks that sparked concerns about future provocations.

This month, the North conducted two apparent rocket engine tests at its west coast satellite launch site. The tests prompted speculation that the North could launch a long-range rocket under the guise of peaceful space development.

Earlier this week, U.S. Special Representative Stephen Biegun made an emphatic call for talks with the North while he is in Asia. But that call has yet to be answered. 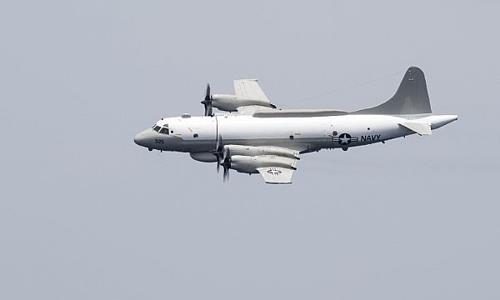