SEOUL, Dec. 21 (Yonhap) -- Fine dust air pollution has been chosen as the top environmental news story of this year in a poll released on Saturday.

According to the poll of 1,097 adults nationwide by Seoul-based civic group Asian Citizens Center for Environment and Health, 59 percent picked "air pollution caused by fine dust and ozone depletion problem" as the most important environment news story of 2019.

In particular, 64.3 percent of the respondents aged between 19 and 29 and 66.2 percent of those in their 30s attached the utmost importance to the fine dust problem.

By region, 61.6 percent of the respondents in Seoul, 63.1 percent in Gyeonggi Province and Incheon and 62.3 percent in Busan, Ulsan and South Gyeongsang Province singled out fine dust pollution as the top environmental news story of the year. 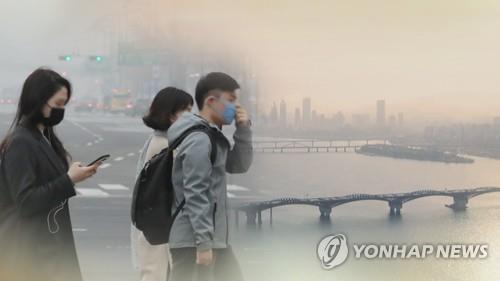 South Korea has been struggling with fine dust particles both from home and blowing in from China, as well as yellow dust from Mongolia during the winter and spring seasons.

In the poll, 11.9 percent of respondents pointed to the ban on disposable cups and plastic bags as this year's No. 1 environmental news story, while 11.6 percent picked Seoul's import ban on radioactive waste tires and coal ash from Japan.

The center said the issue of fine dust has been selected as the nation's top environmental news story for the third consecutive year after it was chosen by 36.9 percent in 2017 and 56.6 percent in 2018.

"The government, industrial circles and the civic society should all join hands to intensively resolve the fine dust problems," the center said.

Meanwhile, 41.2 percent of the respondents said mounting plastic waste threatening marine wildlife is the most important international environmental news story of this year, while 20.7 percent pointed to Fukushima radioactive pollution ahead of the Tokyo Olympics and 8.9 percent a U.N. agreement to prohibit exports of waste disguised as recyclable materials, the center said.