SEOUL, Dec. 20 (Yonhap) -- Japan on Friday partially lifted curbs on exports to South Korea of a chip material, one of three key industrial products subject to recent restrictions, ahead of a bilateral summit meeting set for next week.

But Seoul said that while it represents partial progress, it falls short of being a fundamental solution to the neighboring country's export curbs.

According to Japan's Ministry of Economy, Trade and Industry, it has granted a three-year bulk permit to a single Japanese company for exports of photoresist to a South Korean business partner, effective immediately.

Photoresist is used to transfer a circuit pattern onto a semiconductor substrate in the making of advanced chips.

The decision, a first tangible step toward easing export controls that were implemented in July, came just four days before the planned one-on-one talks between South Korean President Moon Jae-in and Japanese Prime Minister Shinzo Abe in the southwestern Chinese city of Chengdu.

It is not clear, however, whether Seoul and Tokyo will meet bilaterally.

Economic ties between Seoul and Tokyo have been facing an unprecedented deadlock since Japan imposed restrictions on exports to Seoul of three key industrial materials critical for South Korea's chip and display industries in July. Japan later removed Seoul from its list of trusted trading partners.

It was initially thought that Japan's actions would have an impact on local industry due to South Korea's heavy dependence on the three materials controlled by Tokyo -- photoresist, etching gas and fluorinated polyimide.

"Although Japan's move is considered progress in the dispute, we still believe that we need more fundamental solutions to the problem," an official from the presidential office Cheong Wa Dae said.

Tokyo cited South Korea's alleged lax export control system for sensitive materials that can be diverted for military use as the reason behind its export restrictions.

Seoul regards the measures as a retaliation against the country's Supreme Court rulings ordering Japanese firms to provide compensation for Koreans forced into labor during Japan's 1910-45 colonial rule of the Korean Peninsula.

South Korea, whose main export products include semiconductors and smartphones, relied on Japan for more than 90 percent of its supplies of photoresist and fluorine polyimide and for 44 percent of its etching gas over the January-May period, according to the Korea International Trade Association.

Amid the deadlock, the two countries have been making efforts to end the trade war, which could potentially hurt both sides' economies as well as the global supply chain.

Last month, South Korea decided to conditionally suspend the termination of the General Security of Military Information Agreement (GSOMIA) with Japan as a move toward settling the trade row.

It also promised to suspend its ongoing complaint process at the World Trade Organization (WTO).

Earlier this month, South Korea and Japan agreed to continue talks to resolve their monthslong trade row, sharing what they called an "expanded mutual understanding" of each other's export control system during a meeting in Tokyo. 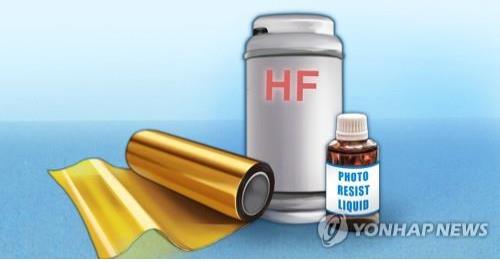