SEOUL, Dec. 23 (Yonhap) -- In what could be a signal of a family feud at South Korea's largest logistics conglomerate, Hanjin Group, the eldest daughter of the group's late chairman on Monday accused her younger brother of ruining the family business.

Cho Hyun-ah, former head of Korean Air Lines Co., claimed her younger brother, Won-tae, was not following their late father's teachings on how to run Hanjin Group, only seven months after their father and former group chairman Cho Yang-ho died from a chronic illness.

"Hanjin Group is moving away from the late chairman's last words," Hyun-ah said through her legal representative. "The late chairman wanted the family to cooperate and run the business together." 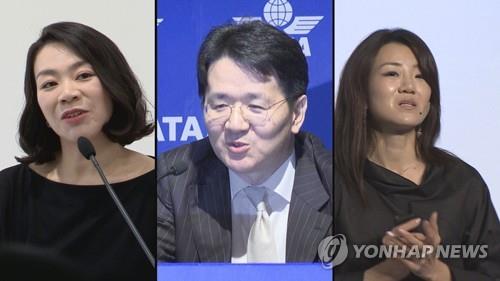 Cho Hyun-ah, 45, became infamously known for her "nut rage" incident in 2014 when she ordered a Korean Air plane to return to its gate at a New York airport after losing her temper over the way she was served macadamia nuts.

Won-tae, 44, took the helm of Hanjin Group when his father died, possibly because of his older sister falling out of favor with their deceased father and the South Korean public due to the 2014 incident.

But earlier in the day, local activist fund Korea Corporate Governance Improvement (KCGI) said it jacked up its stake in Hanjin KAL to 17.29 percent from the previous 15.98 percent, ratcheting up its battle with the logistics conglomerate for an improvement in governance structure.

In her statement, Hyun-ah claimed Won-tae was reacting unfaithfully when it came to issues that need family discussion.

Industry insiders speculated that the two may have differences over Hyun-ah's return to the family-run business empire.

Won-tae later struck back, insisting he was doing all and only what his late father would have wanted.

"We believe restoring our customers' faith and enhancing the value of the company is late chairman Cho Yang-ho's strong wish, as well as his dying instruction," Hanjin Group said in a released statement.

"We are deeply sorry to the people, our consumers and shareholders for the controversy at Hanjin Group. The management and all other staff members of the group have been doing their utmost to meet market expectations ever since Chairman Cho Yang-ho passed away," it added.

The group also warned against causing any unnecessary disturbance.

"Managing a company must be done through due process and under related laws, such as shareholders' meetings and board meeting," the statement said.

"We wish the latest controversy will not hurt the stability of the company's management or undermine its value."