SEOUL, Dec. 23 (Yonhap) -- Special forces of South Korea and the United States carried out regular combined drills last month at a South Korean air force base under the scenario of raiding an enemy camp and capturing an agent, apparently targeting North Korea.

According to photos released by the U.S. military, the U.S.' Special Operations Command Korea and South Korea's Special Warfare Command conducted "close quarters battle training" at Kunsan Air Base located in South Korea's western city of Gunsan in November as part of their regular training program.

The photos uploaded last week show soldiers with rifles entering a building, and hauling a man in. Soldiers were also shown targeting enemy forces from a lookout point and carrying out airborne operations, including parachuting to the ground after conducting a static line jump from a CH-47 Chinook helicopter. 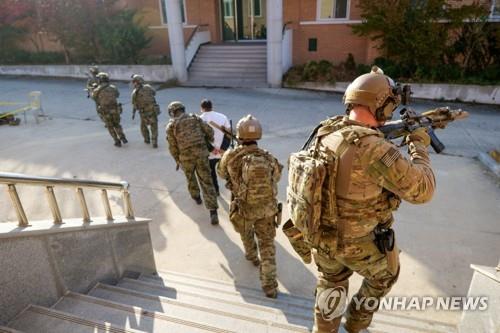 A YouTube video by the Defense Flash News shows more details of the operation, with service personnel throwing a smoke bomb, raiding an office inside the building, shooting at enemy soldiers over the course, and a fighter jet flying over the building.

It is unusual for the U.S. military to make public such materials, though the allies have carried out their combined exercises on a regular basis, according to officials.

The move appears to send a warning message to North Korea which has hinted at stronger provocations, including firing long-range missiles, as the year-end deadline its leader Kim Jong-un sent for Washington to come up with fresh proposals to move the stalled denuclearization negotiations forwards is drawing near.

"North Korea's indicated a variety of things, and -- and I think you're aware of all those. So we are -- we are prepared for whatever," U.S. Joint Chiefs of Staff (JCS) chairman Gen. Mark Milley told a press briefing on Friday. 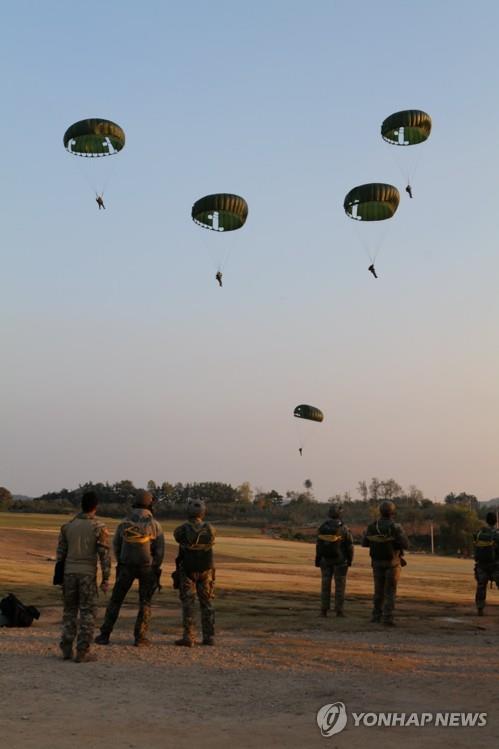