SEOUL, Dec. 23 (Yonhap) -- Gyeongju, the capital of ancient Korea, has been selected as the South Korean city to represent the Culture City of East Asia 2021, the Ministry of Culture, Sports and Tourism said Monday.

South Korea, China and Japan launched the Culture City of East Asia project in 2014 to promote trilateral cultural exchanges and widen understanding of each country's culture and traditions following an agreement reached by their culture ministers in Shanghai in 2012.

Under the program, three representative cities are selected annually to showcase each country's culture and traditions and hold cultural exchange programs throughout the year. 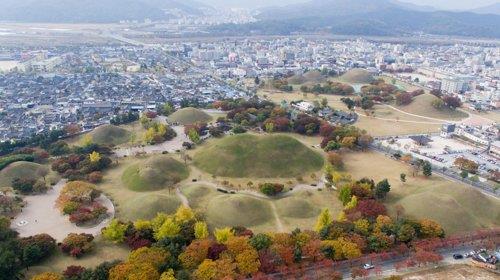 The two other East Asia culture cities for 2021 will be officially announced during the 12th meeting of the three countries' culture ministers, set to be held in Kitakyushu, Japan, next year.

Gyeongju, 370 kilometers southeast of Seoul, was the capital of the ancient Korean kingdom of Silla (57 B.C.-A.D. 935), which ruled about two-thirds of the Korean Peninsula between the 7th and 9th centuries. A vast number of archaeological sites and cultural properties from this period remain in the North Gyeongsang Province city.

"Gyeongju is an attractive cultural and tourist city with world-class cultural assets. Exchanges with other East Asia culture cities in China and Japan will help promote Gyeongju more widely. The government will actively support its cultural and art exchange events," said a ministry official.

Gyeongju's municipal government said it will push for various exchange programs with other East Asia culture cities, particularly in connection with its existing programs, such as Gyeongju Culture Expo.