SEOUL, Dec. 23 (Yonhap) -- As a trade row between South Korea and Japan has continued for months, their tourist exchanges have taken a steep dive, hammering one of the most lucrative tourist routes in Asia.

The number of Korean travelers visiting Japan nose-dived to some 205,000 in November, registering a dramatic fall of 65.1 percent in comparison with the same month last year, according to data by the Japan National Tourism Organization, provided by the Korea Tourism Organization.

The Korean inflow into Japan in November was slightly up from October when some 197,300 Koreans traveled to the neighboring country. The October number marked a 65.5 percent dive from the same month last year, the steepest decline since the 66.4 percent drop registered in April 2011 following a massive earthquake in Japan.

The latest November reading marks the fifth consecutive month that the volume of Korean travelers to Japan registered an on-year decline since first logging a 7.6 percent decrease in July.

South Korean consumers have been boycotting Japanese consumer goods and services, including tours to the country, since Japan unilaterally embargoed the export of three key industrial materials to South Korea in July. 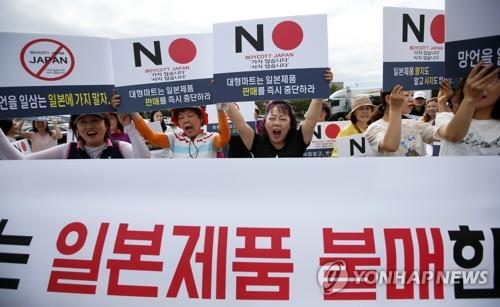 For Japan, South Korean is the second-biggest nation of inbound tourists after China. For South Korea, Japan is also the second-largest sender of tourists following China.

As the solid bilateral tourism exchange has taken a heavy blow over the months, inflows of Japanese tourists to South Korea have also dwindled sharply.

A total of 258,522 Japanese traveled to South Korea in November, down 13.8 percent from a year earlier. It was the second monthly fall in a row after the corresponding figure dropped 14.4 percent on-year to 248,541 in October, according to data by the Korea Tourism Organization.

In a nascent sign of easing tensions last week, Japan lifted its ban on exports of a chip material to South Korea, one of the three export items embargoed in July.

The South Korean government and political parties took it as a step in the right direction but urged the full removal of the trade sanctions for the normalization of bilateral ties.

Both countries have maintained that despite their diplomatic and trade rows, tourism exchanges should continue between the nations.

As the countries strive to get out of the deadlock, a major chance to redress the bilateral row awaits the neighbors this week.

On Tuesday, South Korean President Moon Jae-in will hold a summit with his Japanese counterpart Shinzo Abe on Tuesday on the sidelines of a regular trilateral summit in Beijing, also involving China.

The bilateral trade row is sure to figure prominently in the Moon-Abe summit, the first two-way summit since September last year. 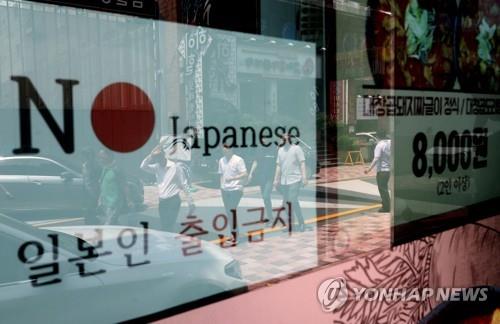