Under the deal, SoftBank Group Corp. -- a holding firm of Z Holdings Corp. that operates Yahoo Japan -- and Naver will buy stocks held by retail investors in Line, Naver said in a regulatory filing. 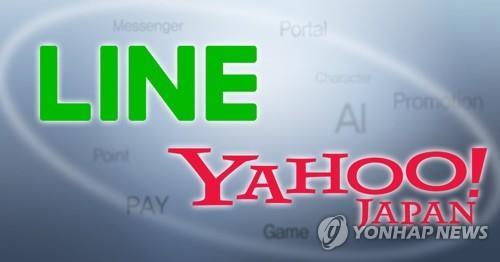 Following the stock buyout, Line and SoftBank will each hold a 50 percent stake in a new joint venture named Z Holdings, which will maintain its listing on the Tokyo bourse, with Yahoo Japan and Line as wholly owned subsidiaries. Line will be delisted.

The deal, which requires approval from Tokyo's fair trade agency, is scheduled to be completed by October 2020.

The formal contract comes nearly a month after the two sides announced the mega deal in a move to form a leading artificial intelligence (AI) company to compete with global behemoths such as Google Inc.

"Our goal is to leap forward as an AI technology company that is based from Japan and Asia to eventually lead the global market by combining resources from both companies," the companies said last month.

Naver said the decision for the business integration will bring together the operators of two of Japan's biggest payment apps amid the "cashless" era.

Line is the most popular chat app in Japan, with 80 million users, far ahead of global platforms such as Instagram and Facebook in Japan. The company posted 207.1 billion yen in sales in 2018.

It is also the dominant messenger app in Taiwan and Thailand, where it has 21 million and 45 million users, respectively.

Yahoo Japan, which has been struggling to bolster services, such as mobile payments and e-commerce, has 50 million users and generated 954.7 billion yen in revenue last year.