HWACHEON, South Korea, Dec. 24 (Yonhap) -- The festive mood is already heating up in Hwacheon, a Gangwon Province county, as it is stepping up preparations to host an annual ice fishing festival next month.

With the opening of the 2020 Hwacheon Sancheoneo Ice Festival just 10 days away, the central street of Hwacheon, about 120 kilometers northeast of Seoul, is decorated with 27,000 fish-shaped lanterns, adding to the festive mood among county residents and tourists.

The lantern lighting ceremony was held at 6 p.m. Saturday with the attendance of citizens and officials, followed by performances by many K-pop singers, including Shinji, Kim Hyun-jung, KCM, Ulala Session, Seojio, Holics and Badkiz. 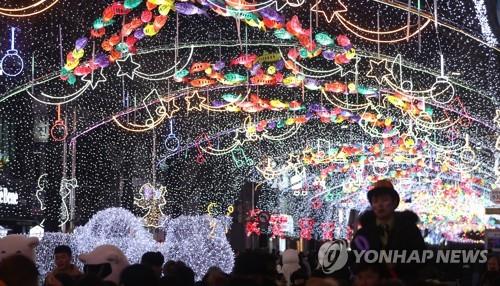 The number of lamps illuminating central Hwacheon streets represents the county's population of 27,000.

During the ceremony, about 600 LED helium balloons were floated high in the sky, carrying a wish for all county residents to foster the ice fishing event into a world-class festival.

Ahead of the lantern lighting ceremony, the world's largest indoor ice illumination plaza featuring more than 30 ice sculptures, including those produced by experts from China's Harbin International Ice and Snow Sculpture Festival, opened to the public in a ceremony at Seohwa Mountain Multipurpose Square.

The 2020 Hwacheon Sancheoneo Ice Festival will take place on a frozen river, about 25 km south of the inter-Korean border, for 23 days from Jan. 4-26.

It will feature some 60 kinds of programs, including barehanded fishing, a sled contest, bobsleigh and ice soccer.

In January this year, nearly 20,000 fishing holes were pierced through the ice over a 2.1-kilometer area about the size of 24 soccer fields, and 180 tons of "sancheoneo" were released during the festival. Sancheoneo is a species of trout known to live only in very clean fresh water. 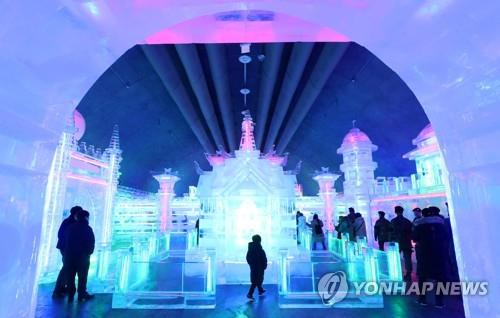 Launched in 2003, the event was chosen as the nation's best festival by the culture ministry in 2010 and has developed into one of the world's four major winter festivals. Many local and foreign news organizations introduced the magnificent scene of people trying to catch fish through holes in the vast frozen river. In 2011, a leading global news organization introduced the festival as one of the world's seven wonders of winter.

"All county officials have done their best to make the street lighting more colorful and enjoyable than ever. We hope many tourists come to the ice fishing festival again like the numerous lights that fill the streets," Hwacheon Mayor Choi Moon-soon said.

The 2019 Hwacheon Sancheoneo Ice Festival drew 1.84 million tourists during its 23-day run, marking an increase of 6 percent from the previous year. The number of foreign visitors also set a new record of 146,000, with some 20,000 of them being individual tourists from about 40 countries. 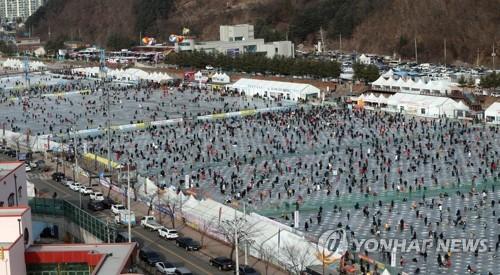 27,000 fish-shaped lanterns light up Hwacheon ahead of ice fishing festival

27,000 fish-shaped lanterns light up Hwacheon ahead of ice fishing festival