(ATTN: UPDATES with remarks on trade, other details in last 8 paras)
By Lee Chi-dong

CHENGDU, China, Dec. 24 (Yonhap) -- The leaders of South Korea, China and Japan on Tuesday reaffirmed their shared goal of achieving the denuclearization of Korea via peaceful means and emphasized the importance of promoting multilateral free trade.

They have confirmed that denuclearizing the peninsula and establishing permanent peace are a common goal and agreed that negotiations are the only resolution, Li added. He hosted this year's trilateral summit, the eighth of its kind, among the regional powers.

"The three nations will continue to work together to resolve the problem in a political manner," he said, adding the leaders had "candid and effective" discussions. 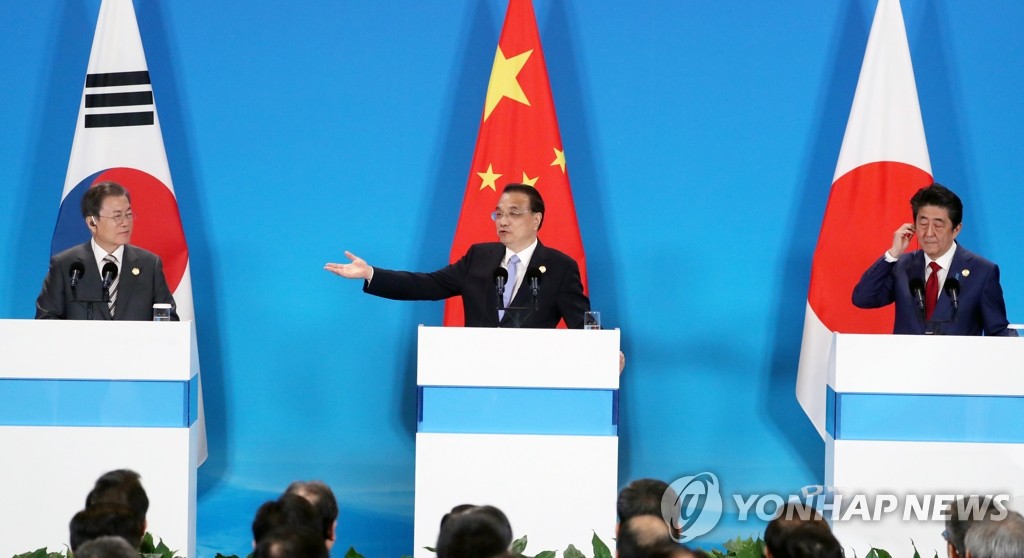 Moon also said the trio has decided to keep communicating and cooperating with one another in the Korea peace process.

"We have shared the perception that peace on the Korean Peninsula are in the interest of the three nations and agreed to make joint efforts for the substantive progress of denuclearization and peace (efforts) via early dialogue between North Korea and the United States," he said.

The Japanese prime minister condemned Pyongyang for its recent "ballistic missile" launches, calling it a "serious threat" to regional security.

The common position of the three countries is that it's important to fully implement the United Nations Security Council resolutions on the North and maintain the momentum of the Washington-Pyongyang dialogue, Abe said.

He added that he explained Tokyo's stance on the issue of Japanese citizens kidnapped by North Korea decades ago in his talks with Moon and Li.

Fostering free trade in the region was another major agenda item.

"We will accelerate free trade agreement talks among China, South Korea and Japan" in tandem with a push for the signing of the Regional Comprehensive Economic Partnership (RCEP), according to Li.

"In addition, we have agreed to cope with such new common challenges as the fourth industrial revolution and protectionism and also create new growth engines via science-technology cooperation," he said.

Meanwhile, the three nations adopted a joint statement on a vision for far-reaching tripartite cooperation in the coming decade.

They plan to hold their next group summit in South Korea in 2020.