The combined R&D expenditures by the top 500 companies by sales stood at 39.3 trillion won (US$33.8 billion) in the first three quarters of the year, up 11.3 percent from a year earlier, according to CEO Score. The tally covers only 211 companies out of the total that have disclosed their R&D expenditures. 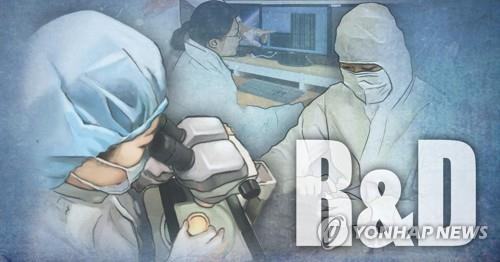 The surveyed companies posted 1,265.3 trillion won in combined revenue in the January-September period, down 0.8 percent from the same period a year ago.

Their total R&D spending took up 3.13 percent of sales, up 0.34 percentage point from a year earlier, CEO score said.

Naver Corp., the country's largest internet portal operator, ranked at the top among local companies in terms of R&D-to-sales ratio, with 25.96 percent, the data showed

Major pharmaceutical firm Celltrion Inc., whose R&D-to-sales ratio was the highest in 2018, was relegated to second place with a ratio of 25.63 percent, the data showed.