SEOUL, Dec. 25 (Yonhap) -- A member of the girl group Red Velvet sustained serious injuries in a fall during a rehearsal for an awards show on Wednesday, her agency announced.

SM Entertainment said Wendy was diagnosed with broken pelvis and right wrist after falling from the stage at Gocheok Sky Dome in Seoul, while preparing for the K-pop show to be hosted and aired by broadcaster SBS later Wednesday.

SM said Wendy, who also suffered a facial injury, received emergency treatment and will undergo further tests at a nearby hospital. 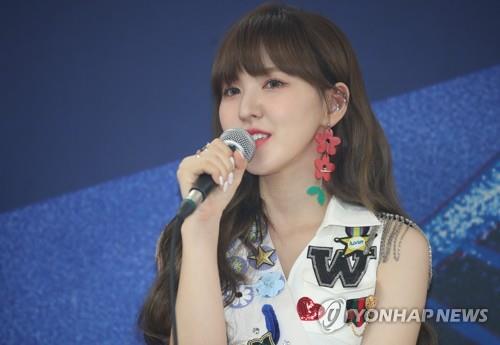 Red Velvet released a 16-track album titled "The ReVe Festival: Finale" on Monday. According to SM, it immediately topped the iTunes album charts in 42 countries.

Red Velvet had been scheduled to perform the lead single from the new album, "Psycho," during Wednesday's show and will not now participate in it.

SM said it will have to adjust the schedule for Red Velvet's promotion activities following Wendy's injury.

SBS released a short statement on its website, apologizing to fans and television viewers for Red Velvet's absence and wishing Wendy a speedy recovery.
(END)