SEOUL, Dec. 27 (Yonhap) -- The South Korean military conducted an exercise on Friday to strengthen defense capabilities for the country's easternmost islets of Dokdo, the first such drills in four months, a source said, amid budding efforts to restore ties with Japan strained over trade and wartime history.

The Korean Navy did not make the exercise public in an apparent move to avoid further aggravating tensions with Japan, which has persistently laid claim to the rocky islets in the East Sea.

"The Navy carried out the annual exercise aimed at safeguarding the East Sea territory," the source said on condition of anonymity.

Due to inclement weather, the Navy had a simulated command post exercise, he added.

The apparently low-key nature and small scale of this week's exercise appears to reflect ongoing efforts to restore relations between the two countries, which were dealt a major blow after Japan imposed new export restrictions against Korea in July.

Seoul has called for the lifting of the curbs, regarding them as political retaliation for last year's Supreme Court rulings against Japanese firms over wartime forced labor.

Tensions have recently eased due to Seoul's decision last month to put off the termination of its bilateral military information-sharing accord with Tokyo.

The two countries have stepped up diplomacy through high-level talks, such as this week's summit between South Korean President Moon Jae-in and Japanese Prime Minister Shinzo Abe.

South Korea last carried out the Dokdo exercise in August, mobilizing some 10 vessels and 20 aircraft, including F-15 fighters. 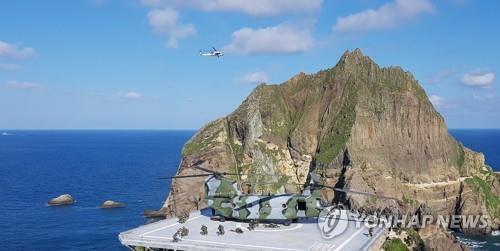