SEOUL, Dec. 29 (Yonhap) -- Popular sunset and sunrise locations across the country are ready to host various festive events for visitors seeking to bid farewell to the outgoing year and greet the new year in a romantic and memorable way.

Traditionally, Koreans have attached enormous significance to viewing the year's first sunrise and last sunset to look back on the past year and wish for prosperity and happiness in the coming 12 months.

This week, a number of sunset and sunrise hotspots nationwide, mostly at beaches and mountaintops, are set to welcome local and foreign visitors with concerts, traditional performances, folk games, fireworks shows and other colorful events. 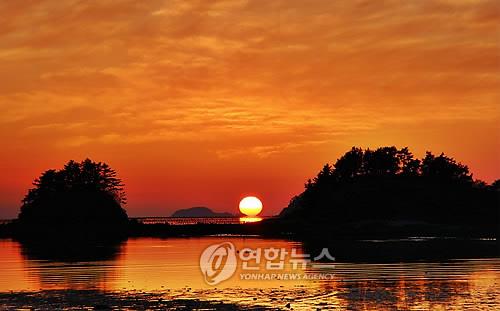 Ideal sunrise spots are mostly located on the eastern coast, while the western coast is recommended for seeing the picturesque sunset.

But some locations along the southern coast are popular as both sunrise and sunset spots.

Haenam, a southern coastal county in South Jeolla Province renowned for being home to the Ttangkkeut (end of land) Village, can be visited for such dual purposes. The county plans to hold the 24th Ttangkkeut Sunset Sunrise Festival on Tuesday and Wednesday around the Ttangkkeut Village located in the county's Songji-myeon district, featuring many folk plays, cultural performances and concerts.

Haenam, the southernmost tip of the Korean Peninsula located about 423 kilometers south of Seoul, is said to command a fantastic view of sunset and sunrise over an archipelago. 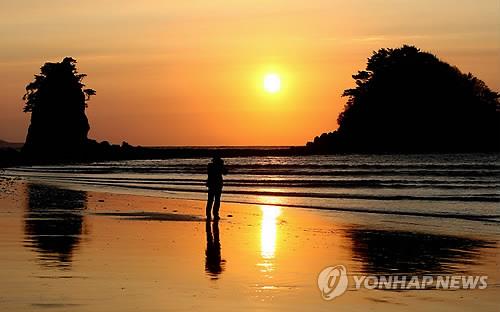 Boseong, a county in South Jeolla Province about 395 km south of Seoul, will team up with Hanwha Group to stage a year-end fireworks festival on Yulpo Beach Tuesday for residents and tourists gathered to see the last sunset of the year.

Byeonsan Beach in Buan, North Jeolla Province, is famous for offering a beautiful sunset view. The county of Buan, located on the western coast about 280 km south of Seoul, plans to host the 7th Byeonsan Sunset Festival on Monday and Tuesday.

Mount Baekhwa and Yeonpo Beach, both in Taean, 130 km south of Seoul, will offer sunrise events beginning at 7 a.m. on Wednesday. 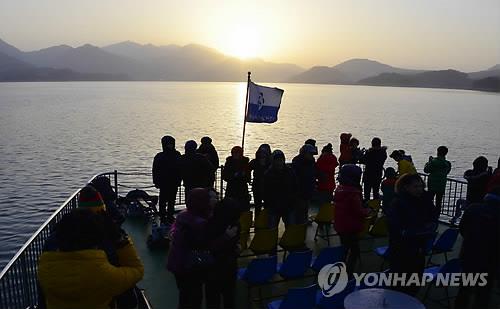 Cheongpung Lake in Jecheon, 168 km southeast of Seoul, is praised for commanding an outstanding view of sunrise.

A civil organization based in Jecheon plans to hold the 2020 Sunrise and Citizen Well-wish Ritual aboard a Cheongpung Lake cruise from 6:30 a.m. on the first day of the new year.

The Gyeonggi provincial government plans to hold a year-end and year-beginning event featuring cultural and art performances at Namhansanseong, a historical mountain fortress about 25 km southeast of Seoul, on Tuesday night.

Incheon's municipal government will host a sunrise event from 6 a.m. on Wednesday on Jangbong Island, a border island in the Yellow Sea.

The eastern coast is home to a number of famous sunrise hotspots.

The municipality of Gangneung, 237 km east of Seoul, plans to hold various cultural performances and concerts at Jeongdongjin Beach and Gyeongpodae Beach between Tuesday and Wednesday in celebration of the meaningful sunset and sunrise. 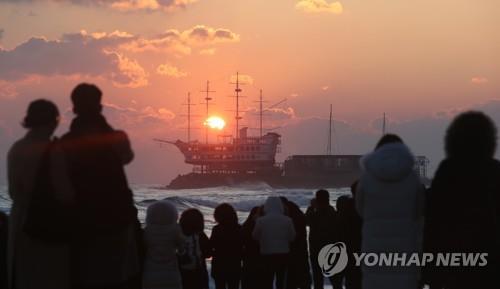 Municipal officials anticipate a crowd of over 300,000 people at the two beaches.

Separate sunrise festivals are to take place in other Gangwon Province cities and regions, including Sokcho, Yangyang and Goseong.

At the Goseong Unification Observatory, close to the inter-Korean border, a bell-ringing ceremony will be held at 6:30 a.m. Wednesday to wish for the resumption of land-route tourism to North Korea's scenic Mount Kumgang.

Pohang, a North Gyeongsang city about 374 km southeast of Seoul, is also a traditional hotspot to watch romantic sunrises. Pohang will host the 22nd Homigot Sunrise Festival on Tuesday and Wednesday, which will include a circus performance, a silent movie show, a busking performance and fireworks show. 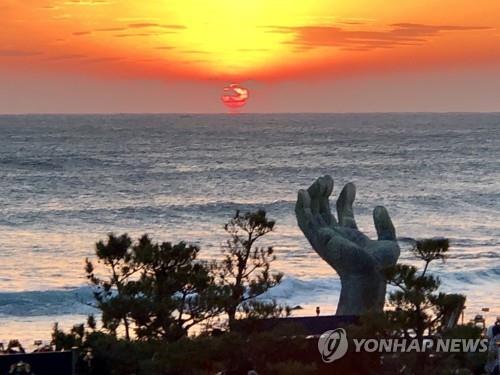 Busan, the nation's second largest city, on the southern coast, will also abound with sunset and sunrise events.

On Tuesday night, colorful fireworks and laser shows will illuminate the sky over Haeundae Beach. The famous Busan beach will also host a sunrise event from 6 a.m. Wednesday, while the municipal government will open the city's landmark Gwangan Grand Bridge to pedestrians wanting to view sunrise from the bridge for three hours from 6 a.m.

On the southern resort island of Jeju, the 27th Seongsan Sunrise Festival will take place Monday through Wednesday around Seongsan Ilchulbong (Sunrise) Peak, a UNESCO World Heritage site. The peak, situated on Jeju's eastern side, is said to have the best view of sunrise on the island.

Visitors will be able to enjoy a sunrise-themed parade by Jeju residents, congratulatory concerts, a talent show, cultural performances and a fireworks display around Seongsan Ilchulbong Peak.

The Jeju provincial government will also open the hiking trail leading to the top of the 1,950-meter-high Mount Halla and Baekrokdam Lake from Tuesday midnight for residents and tourists wanting to view the new year's first sunrise from the nation's highest mountain.