SEOUL, Dec. 30 (Yonhap) -- North Korea has discussed "offensive measures" to ensure the country's sovereignty and security during the second-day session of a major party meeting, state media reported, amid concern Pyongyang could ditch negotiations with the United States and restart major weapons tests.

In Washington, National Security Adviser Robert O'Brien warned the North against any provocations, saying the U.S. will be "extraordinarily disappointed" in such cases and will demonstrate its disappointment. He also said the U.S. has "a lot of tools in our toolkit" to respond to the North.

The plenary meeting of the Central Committee of the North's ruling Workers' Party came as Pyongyang has threatened to take a "new way" if Washington fails to offer concessions in their nuclear talks before the end of this year, hinting that it would end diplomacy and return to provocative acts.

It also came days ahead of a much-anticipated New Year's Day address that North Korean leader Kim Jong-un is to deliver, in which he is expected to announce a major policy shift related to denuclearization and diplomatic issues.

Kim opened the party meeting Saturday and presided over its second-day session Sunday.

"Emphasizing the need to take positive and offensive measures for fully ensuring the sovereignty and security of the country as required by the present situation, he indicated the duties of the fields of foreign affairs, munitions industry and armed forces of the DPRK," the Korean Central News Agency said without elaborating on what the "offensive measures" would be.

"He put forward in detail the orientation of the struggle for bringing about a decisive turn in the development of the country's economy and people's standard of living as required by the Korean revolution and the building of a powerful socialist country and its practical ways," it added.

Kim also called for efforts to improving science, education and public health, apparently placing emphasis on domestic issues, which experts say appear to be in line with North Korea's push for a self-reliant economy.

The KCNA said the plenary meeting "goes on," suggesting there will be a third-day session Monday.

It is unusual for the North to have such a multiple-day party meeting. The plenary party meeting is one of the communist state's highest decision-making bodies, though it rubber-stamps the policy presented by Kim who has absolute power.

North Korea earlier said that Kim presided over the first-day session of the meeting Saturday, which was held to "overcome the manifold and harsh trials and difficulties and further accelerate the development of the revolution with transparent anti-imperialist independent stand and firm will." 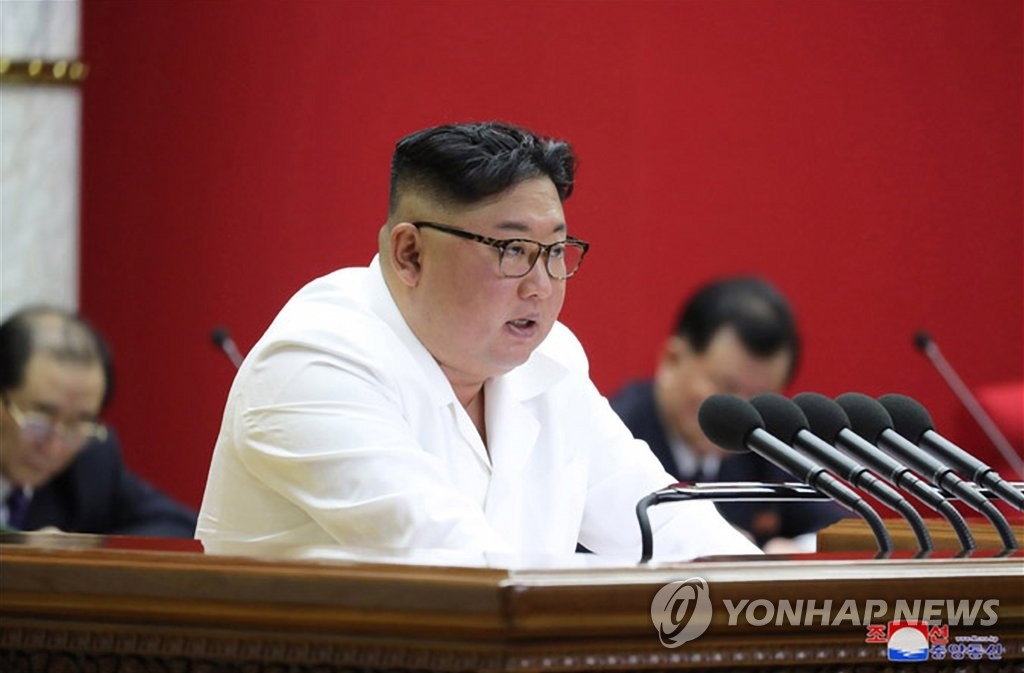 Experts say that by "offensive measures," the North appears to be referring to efforts to beef up its nuclear armaments, but they also note that Pyongyang might be leaving room for negotiations by maintaining "ambiguity" without elaborating on what they are all about or making harsh words directly aimed at the U.S.

Some, however, said that the North's rhetoric might have been intentionally toned down to avoid overshadowing leader Kim's upcoming New Year's Day address on Wednesday.

South Korea's unification ministry said it is believed to be the first time for the North to hold a multiday party meeting since Kim took office in late 2011. The ministry added that it is closely watching the results of the North's meeting.

The party meeting comes amid growing speculation that North Korea could declare an end to denuclearization talks with the U.S. and resume tests of intercontinental ballistic missiles or nuclear weapons as its self-imposed year-end deadline is drawing near without concessions from Washington.

Adding to the speculation, the North conducted what appears to be a rocket test twice this month at its west-coast satellite launch site, saying it will bolster its "nuclear deterrent."

An ICBM test would represent a setback for U.S. President Donald Trump as he has boasted of the suspension of such weapons tests as one of his greatest diplomatic achievements.

It was when the North held a plenary meeting of the party's Central Committee that it declared a moratorium on nuclear and long-range missile tests. The highly symbolic gesture led to Kim's first-ever summit with Trump two months later.

Kim and Trump met in Singapore in June last year and agreed to work toward complete denuclearization of the Korean Peninsula in exchange for security guarantees by Washington and new relations between the two countries.

Denuclearization talks have been stalled since their second summit in Hanoi in February this year ended without an agreement due to wide differences over how to match Pyongyang's denuclearization measures and Washington's sanctions relief.

North Korea earlier warned that it is entirely up to Washington what "Christmas gift" it wants to get, spawning speculation a major provocation might be forthcoming. The holiday passed without a test, but Washington and Seoul remain on high alert.

Speculation is growing that North Korea could conduct an ICBM test disguised as a satellite launch.

North Korea said that it has a sovereign right to fire a satellite into space for peaceful purpose, though the international community sees it as a cover for developing long-range missiles as they share many technologies.

Pyongyang's state media have recently carried a series of articles featuring satellite launches of its neighboring countries, including Russia.

The U.S. has warned Pyongyang against provocations, saying it could lose everything. North Korea has said that it has no more to lose.