A parliamentary vote came about eight months after the ruling party-led bloc placed related prosecution reform bills on a legislative fast track in late April, along with an electoral reform bill.

The establishment of the proposed corruption probe unit is aimed at overhauling the prosecution, one of the key election pledges by President Moon Jae-in.

Amid protests by the main opposition Liberty Korea Party (LKP), the bill was passed by a 159 to 14 vote, with three abstentions. For the passage, at least 148 lawmakers of the 295-member assembly must approve the bill. 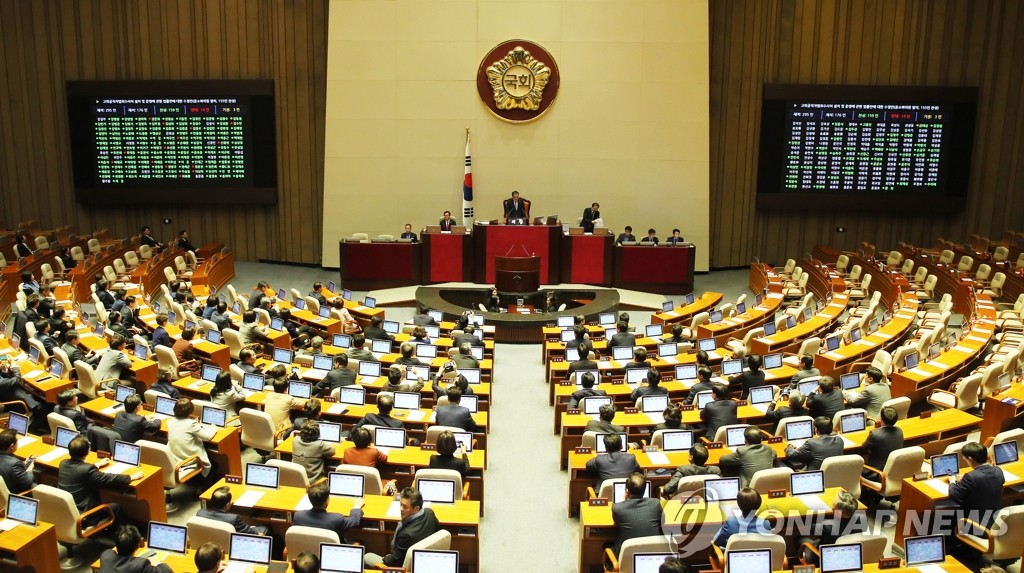 The conservative LKP attempted to occupy the podium of National Assembly Speaker Moon Hee-sang to prevent the vote on the bill. But the speaker exercised his power to restore order to control protesting LKP lawmakers.

LKP lawmakers, who left the assembly's main hall en masse at the start of the vote, criticized the ruling Democratic Party (DP) for having "railroaded the worst bill in history."

The LKP party members then announced they will resign to protest the unilateral passage of the latest bill.

"Most LKP members couldn't hold in their anger at the latest railroading of a bill following two previous bills that were rammed through the assembly," the party's floor leader, Rep. Shim Jae-chul, told reporters. The other bills are the 2020 national budget and changes to election laws. The bills were opposed by the main opposition party. He said that such outrage allowed lawmakers to reach a consensus on giving up their seats.

The party leadership will later decide on how to handle the resignations of the lawmakers, he said.

Under the bill, the proposed unit will be empowered to investigate corruption committed by ranking public officials, including the president, lawmakers, top court justices and prosecutors. Among them, the agency can directly indict police, prosecutors and judges.

A seven-member committee to recommend the chief of the unit will be formed and the president will select one of two candidates who receive support from six panel members. A parliamentary confirmation hearing is needed for appointment.

The bill also obliges the prosecution to report to the proposed probe unit all of its information on suspected crimes by high-ranking officials under its investigation, in what critics have called a "poisonous" clause.

With the passage of the bill, the envisioned unit is expected to set sail in July next year.

In response, prosecutors said they have no official stance on the passage.

The presidential office Cheong Wa Dae welcomed the passage, vowing to complete a mission to promote "checks and balances" of powerful organizations.

"This is a historic moment in light of people's aspiration (for prosecution reform) and the democratic value of checks and balances," Cheong Wa Dae spokesperson Ko Min-jung said in a statement.

She said the Moon Jae-in administration will spare no effort to help the proposed agency accomplish a historic mission to promote checks and balances.

Cho Kuk, former justice minister embroiled in a scandal involving his family, assessed the bill passage as an occasion to set the stage for "irreversible" institutionalization of prosecution reform.

"The bill heralds a critical change in a system where only the prosecution can have the right to file charges, something that has been kept like an impregnable fortress," Cho said on his Facebook page.

Cho, key architect of Moon's vision for prosecution reform, resigned in late October in the face of a prosecution probe into alleged financial irregularities and academic favors involving his family.

The LKP has vehemently opposed the measure, claiming that the president could control the judiciary and prosecution sectors with his right to appoint the head of the agency.

Speaker Moon introduced the motion during a previous extra session on Friday, but the LKP blocked it with a filibuster. Under parliamentary rules, the party could not use such obstructive tactics with the same bill on Monday when a new extra session began.

The LKP plans to push for a constitutional appeal to nullify the passage of the bill, describing the proposed agency as a "monstrous" organ, like North Korea's secret intelligence agency.

The South Korean prosecution has the right to both investigate and file charges, unlike prosecutors in major countries, like the United States and Britain.

The prosecution has often come under public criticism for allegedly abusing its massive investigative power while currying favor with those in power for its own interests.

In 1996, People's Solidarity for Participatory Democracy (PSPD), a progressive civic group, called on lawmakers to enact anti-corruption bills, including the establishment of a corruption probe agency.

The bill was also passed 17 years after former liberal President Roh Moo-hyun vowed the creation of such unit in one of his election pledges in 2002.

Speaker Moon is also expected to introduce a bill to empower police with greater investigative authority, another key proposal to reform the prosecution, in future parliamentary sessions.

The National Assembly on Friday passed an election reform bill on a fast-track that calls for adopting a new proportional representation system and lowering the voting age. 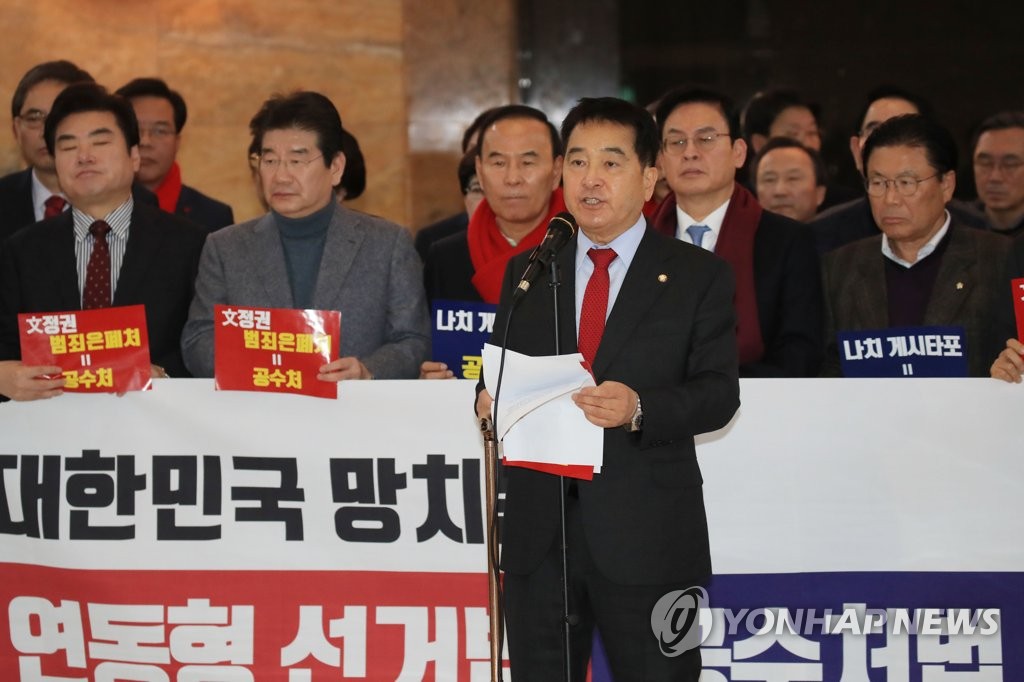