Kang made the call during the Strategic Coordination Meeting on Foreign Affairs, a gathering of government officials and scholars that was launched in July to discuss policy strategies amid tensions between Washington and Beijing over trade, maritime security and other issues.

Stressing "greater-than-ever" uncertainty in the diplomatic landscape, the minister put forward a set of policy tasks such as solidifying cooperation with "all" neighboring countries and pursuing policy consistency based on national interests and principles.

"To respond to a new challenge that comes from a shift in international politics, a mold-breaking, macroscopic and multidimensional strategy on a pending issue -- rather than a one-dimensional one -- is needed," Kang said.

"We need to carry out a preemptive, proactive diplomacy that would detect the opportunities hidden in challenges and crises and maximize them," she added.

Kang noted the geopolitical vulnerabilities of the divided peninsula surrounded by major powers, but she voiced hope that the ongoing peace efforts with North Korea could later help turn the vulnerabilities into "strengths."

"Should a peaceful coexistence of the two Koreas and by extension a unified Korean Peninsula be realized, these would be not so much vulnerabilities as our strengths," she said. "This will indeed be a geopolitical game changer." 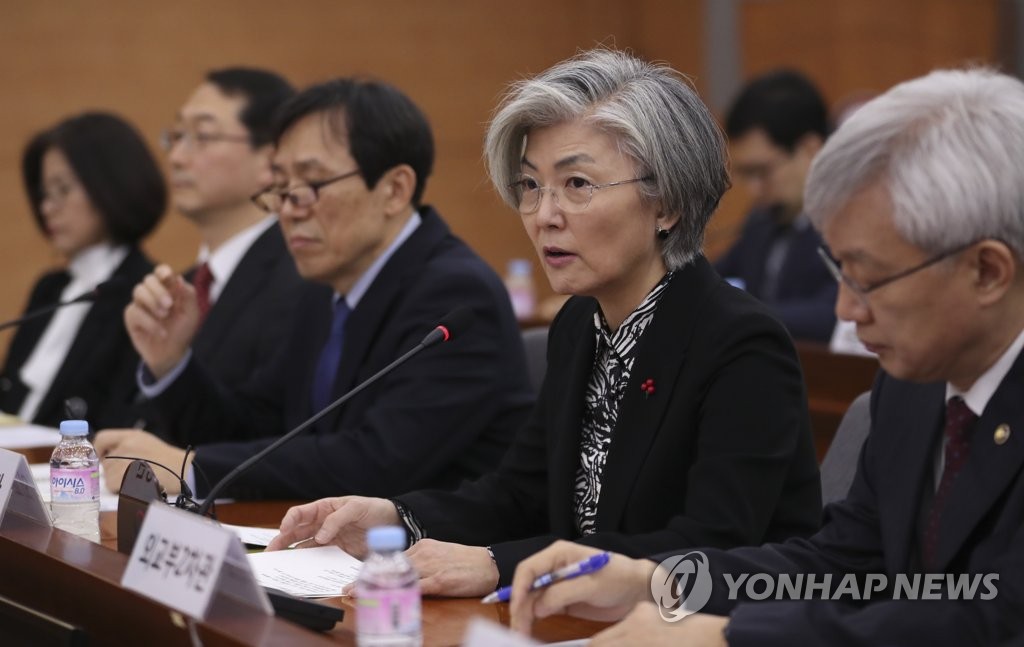 The second such meeting was attended by around 60 officials, scholars and experts who have put their heads together to cope with diplomatic challenges stemming from a mix of strategic competition and confrontation between the United States and China.

The challenges include America's campaign against Chinese telecom titan Huawei, its move to install longer-range ballistic missiles in East Asia and China's opposition to the installation of a U.S. missile defense system in South Korea.

The minister also stressed the importance of foreign policy consistency on specific diplomatic cases so as to garner greater international confidence and enhance predictability for South Korea's diplomacy.

In addition, she called for "strategic" economic diplomacy to better protect South Korean citizens and businesses abroad and help sharpen the country's competitiveness for the future.

Also at the meeting, Je Hyun-jung, a director at the Korea International Trade Association, called for the government to continue dialogue with the private sector to reflect their views in policy formulation.

The foreign ministry plans to install a working-level task force with people from the government, academia and industries to strengthen public-private cooperation in addressing changes in international affairs.