SEOUL, Dec. 30 (Yonhap) -- CJ ENM, the operator of K-pop-oriented music channel Mnet, said Monday it will provide all necessary support for K-pop bands IZ*ONE and X1's resumption of their music careers, issuing an apology for the vote-fixing scandal of its high-profile idol competition show.

"We will provide every support possible ... so IX*ONE and X1 could resume their activities at the earliest time possible," CEO Heo Min-heoi of CJ ENM said in a press conference.

Launched in 2016, the "Produce" series has been the most successful of a wave of K-pop competition shows in the genre's roughly 10-year history.

Through its four seasons, the annual Mnet competition show has created four sensational K-pop bands -- I.O.I, Wanna One, IZ*ONE and XI -- and has become a promising channel for the debut of aspiring K-pop stars. But the latter two groups suspended their activities after the show was investigated by police for allegedly rigging the results of its voting to choose the winners.

"In consideration of the mental distress and pressure the members must be feeling now, as well as many fans who wish for the revival of the bands' (music) careers, (CJ) will make utmost efforts for the swift resumption of IZ*ONE and X1," according to the CEO.

The return of the two bands, however, is likely to spawn another controversy as some members are suspected to have joined the groups illegally. CJ did not disclose which competitors were unjustly eliminated or qualified in the troubled third and fourth seasons of "Produce 101."

"We deserve all the blame and the artists who debuted or individual trainees have no fault. We appeal for protection so as not to cause further victims," Heo noted.

CJ, however, did not disclose the timing of the two bands' return, saying the company is still in discussion over the matter.

"I am heart-broken thinking the wounds of so many trainees who poured their passion for their only dream of a K-pop debut. I am also sorry for fans who participated in voting," he said.

In the press conference, CJ said it will provide compensation to trainees who were victimized in the vote rigging, including financial compensation as well as other practical relief measures to support their future careers.

The CEO also announced a plan to establish a 30 billion won (US$25.9 million) fund to help further develop the K-pop industry, adding that CJ will allocate all the revenues from its audition shows as well as future revenues to set up the fund. 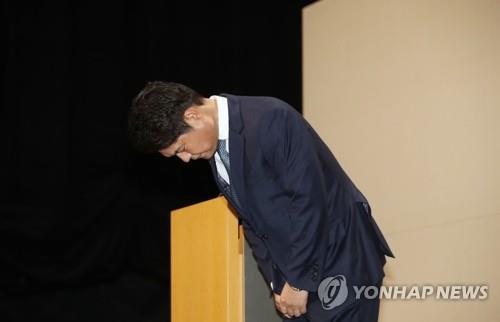 The assistance the fund will provide will go to underground producers, smaller talent agencies, as well as to the establishment of a K-pop research center, according to CJ ENM. It will assign an outside organization to manage the fund "transparently." 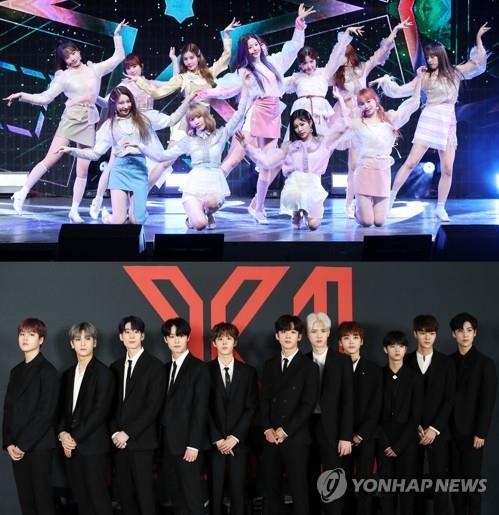 The show's director Ahn Joon-young and chief producer Kim Yong-beom were taken into police custody last month on charges of taking tens of millions of won in bribe from talent agencies in return for fixing the show's vote results in favor of the agencies' artists.

The result of the fan-voted show's fourth season, "Produce X 101," was immediately received with a public outcry at the show's final episode in July as some promising members were eliminated in the final competition to select the final 11 members of X1, despite their outperformance throughout the season.

Angry fans detected suspicious numerical patterns in the season's final vote count and threatened to bring the case to the police, resulting in Mnet's request of an official police investigation into the case. With the police investigation, Mnet's other idol audition shows have also come under a scrutiny.

"CJ will resume the production of idol audition shows only after it secures transparency and regains public trust," another CJ official said.

"CJ will take swift actions to intensify fairness and transparency in the broadcasting (of Mnet)," according to the chief of CJ ENM. He named the establishment of a viewers' committee and reform of work ethics as some of the actions to be taken.

"(Audition shows), if their fairness and trust are secure, are valuable (channels) for new artists to find new opportunities and globalize K-pop," Ha Yong-soo, another high-ranking CJ official, said.

"We are to blame for (the scandal), but it is important to keep seeking the globalization of K-pop," he said.