SEOUL, Dec. 31 (Yonhap) -- South Korea's central bank said Tuesday that it net sold US$2.87 billion in the third quarter of the year to smooth out volatility on the local foreign currency market.

In the first nine months of the year, the central bank sold a total of $6.67 billion for the currency market stabilization operations, according to the Bank of Korea.

It marked the third time the BOK released such information as part of efforts to boost its transparency for potential currency market intervention, but the central bank did not disclose any other details. 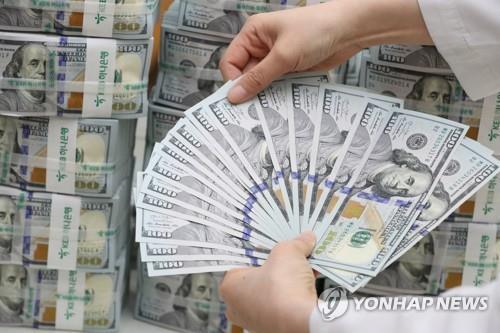 The net selling apparently came in the face of a sharp decline in the value of the local currency to the U.S. dollar amid an intensifying trade row between the United States and China.

Since early August when Washington designated Beijing as a currency manipulator, the Korean won soared to a yearly low of 1,223.00 to the greenback.

Meanwhile, the BOK said earlier it will begin releasing quarterly figures from December, when its market stabilization efforts in the third quarter will be released.

The won's weakness came amid concerns that Asia's fourth-largest economy is losing its growth momentum in the face of a decline in chip prices and the escalating Sino-American trade conflict.

The economy is expected to grow some 2 percent this year, sharply slowing from last year's 2.7 percent on-year expansion.

The central bank trimmed its policy rate to a record low of 1.25 percent in October after cutting it by a quarter percentage point to 1.5 percent in July amid heightened downside risks.