SEOUL, Jan. 1 (Yonhap) -- Defense Minister Jeong Kyeong-doo said Wednesday that South Korea will maintain a watertight defense posture and increase military capabilities to bring lasting peace to the peninsula in the face of rising security uncertainties in the region.

Jeong made the remark in his new year message, noting that North Korea fired 25 short-range missiles last year and conducted artillery firing drills on the border island of Changrin in the Yellow Sea, violating the inter-Korean military agreement signed in September 2018.

He said neighboring countries have been strengthening their armed forces by increasing their numbers of aircraft carriers, stealth fighters and strategic surveillance. Last year, regional tensions increased due to combined exercises by China and Russia, and their warplanes' repeated entry into South Korea's air defense identification zone (KADIZ). 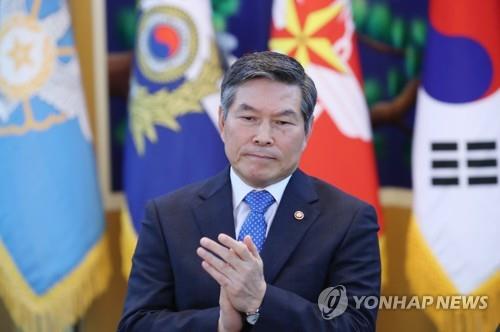 "There are heightened possibilities of accidental clashes in the air and the sea," Jeong said. "We have to maintain stern military discipline and strict mental readiness, and maximize our combat capabilities through drills like actual fighting."

He said it is also necessary to establish a strong defense posture against security threats from all directions, including transnational, non-military security threats like terrorism, cyberattacks and natural disasters.

"We have to ease the military tension between the South and the North, and create momentum for the peace process on the Korean Peninsula through carrying out the September military agreement again," he noted. "I am confident that we can support our government's strategy of 'peace through strength' with greater strength."

The defense chief also called for military reform as a way to increase efficiency and transparency in the military administrative system in the new year, citing a record 50 trillion-won (US$41.29 billion) budget for 2020.
(END)