"Happy New Year 2020 everyone! Did you make any resolutions for 2020? Here's my list, including two I failed to make in 2019. Let me know if you think there's something I should add!" Harris wrote on his Twitter account.

The attached list of activities Harris wants to do in 2020 includes visiting South Korea's central North Chungcheong Province, learning to make the Korean dish of "japchae," commemorating the centenary of Philip Habib's birth, honoring the 70th anniversary of the beginning of the Korean War, visiting the southern island of Koje and the landing of the "Ship of Miracles," and continuing to "support our ironclad U.S.-ROK Alliance."

Habib is a former U.S. ambassador to South Korea, whose intervention saved the life of then South Korean opposition party leader Kim Dae-jung. The official U.S. ambassadorial residence in Seoul was named after him, the Habib House, built in the traditional Korean style.

The "Ship of Miracles" refers to the SS Meredith Victory, which evacuated about 14,000 refugees from North Korea during the Korean War, while ROK stands for the Republic of Korea, the official name of South Korea.

Harris began his official work as the ambassador to South Korea in July 2018. 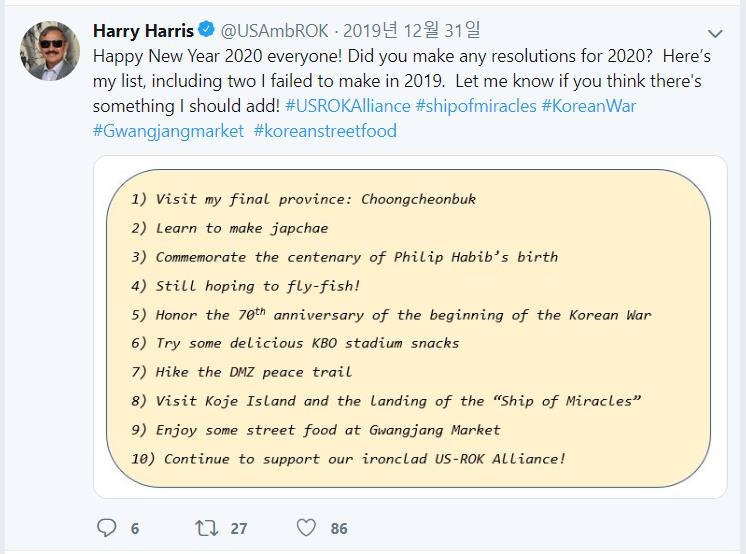