Convening a four-day ruling party session through Tuesday, Kim said he sees no reason to stick to his commitment to suspend nuclear and intercontinental ballistic missile (ICBM) tests, accusing the U.S. of "abusing" denuclearization talks for its own political interests.

Kim said the North should "more actively push forward the project for developing strategic weapons" and that "the world will witness a new strategic weapon to be possessed by the DPRK in the near future," according to the Korean Central News Agency on Wednesday.

Kim also said the North will "shift to a shocking actual action to make it pay for the pains sustained by our people so far and for the development so far restrained."

Experts said the North could resume weapons tests as early as this month, but for now, the door remains open for both dialogue and provocation depending on the U.S. response. They cited Kim's remarks that how much the North will bolster its nuclear deterrent "will be properly coordinated depending on the U.S. future attitude to the DPRK."

"North Korea could test a low-level weapon before the end of next month, and ramp up the pressure down the road depending on the response from the U.S.," professor Yang Moo-jin at the University of North Korean Studies said.

Shin Beom-chul, a senior fellow at the Asan Institute of Policy Studies, said Pyongyang could carry out a major provocation in March when South Korea and the U.S. usually conduct one of their largest annual joint exercises, which the North has denounced as an invasion rehearsal.

"Lower-level provocations could resume as early as this month or next month," Shin said.

During the party meeting, the North Korean leader lashed out at the U.S. for conducting such joint military exercises and shipping "ultra-modern warfare equipment" into the South, even though Pyongyang dismantled its nuclear testing site and committed to suspending nuclear and ICBM tests as part of measures to build confidence with the U.S.

"There is no ground for us to get unilaterally bound to the commitment any longer," Kim said.

Kim also said that denuclearization of the Korean Peninsula is out of the question as long as the U.S. persists in its "hostile policy" and that the country "will steadily develop necessary and prerequisite strategic weapons for the security of the state until the U.S. rolls back its hostile policy."

Experts said this could mean that dialogue could resume when the U.S. eases sanctions on the North and promises to stop the joint military exercises.

"Kim is basically urging Trump to make a choice," professor Kim Yong-hyun at Dongguk University said. "He has just passed the ball into Trump's court." 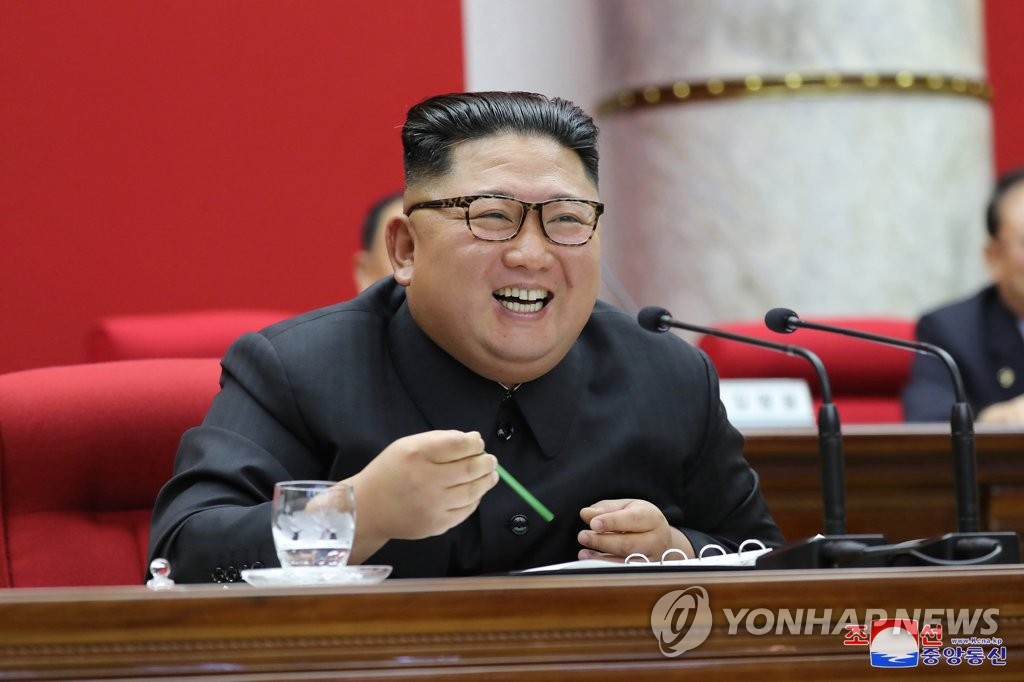 Some experts said that even if the North undertakes provocations, it will make sure not to cross over the "red line," such as with ICBM launches, because it could strain relations with China and Russia.

"Even if North Korea makes a provocation, such a move should be within the realm tolerable to China. Pyongyang cannot let Beijing turn against it," professor Lim Eul-chul at Kyungnam University said.

Amid such deadlock, Kim urged the North's people to "make frontal breakthrough with the might of self-reliance to tide over the difficulties."

The rare multiday party plenum came amid heightened tensions on the Korean Peninsula ahead of the year-end deadline Pyongyang has set for Washington to come up with a new, agreeable proposal in their negotiations.

Denuclearization talks made no major progress since Trump and Kim held their second summit in Hanoi in February. The summit collapsed without a deal due to wide differences over the scope of Pyongyang's denuclearization measures and Washington's sanctions relief.

In December, North Korea conducted two apparent rocket engine tests at its satellite launch site, deepening concern it may be gearing up preparations to test-fire an ICBM.

The U.S. appears to be trying to keep the situation under control, with Trump saying just hours after the threat that he believes Kim will uphold his commitment to denuclearize.

"I think he's a man of his word. So, we're going to find out," Trump told reporters at his Mar-a-Lago resort in Florida.

"It remains the case that we hope Chairman Kim will take a different course," Pompeo told Fox News.