SEOUL, Jan. 2 (Yonhap) -- President Moon Jae-in held out hope Thursday for the role of his new justice minister, Choo Mi-ae, conferring a letter of appointment on her and filling the post that had been vacant for more than two months.

Moon, a former lawyer, called for "innovative" changes in the way prosecutors conduct probes, related practices and the internal culture of the organization.

He also stressed the importance of protecting human rights more strictly in the investigation process and the prosecution taking active self-reform measures.

"Although it's a very difficult task (to reform the prosecution), I think it will be hard (for us) to have the chance we have now again historically," the president said. 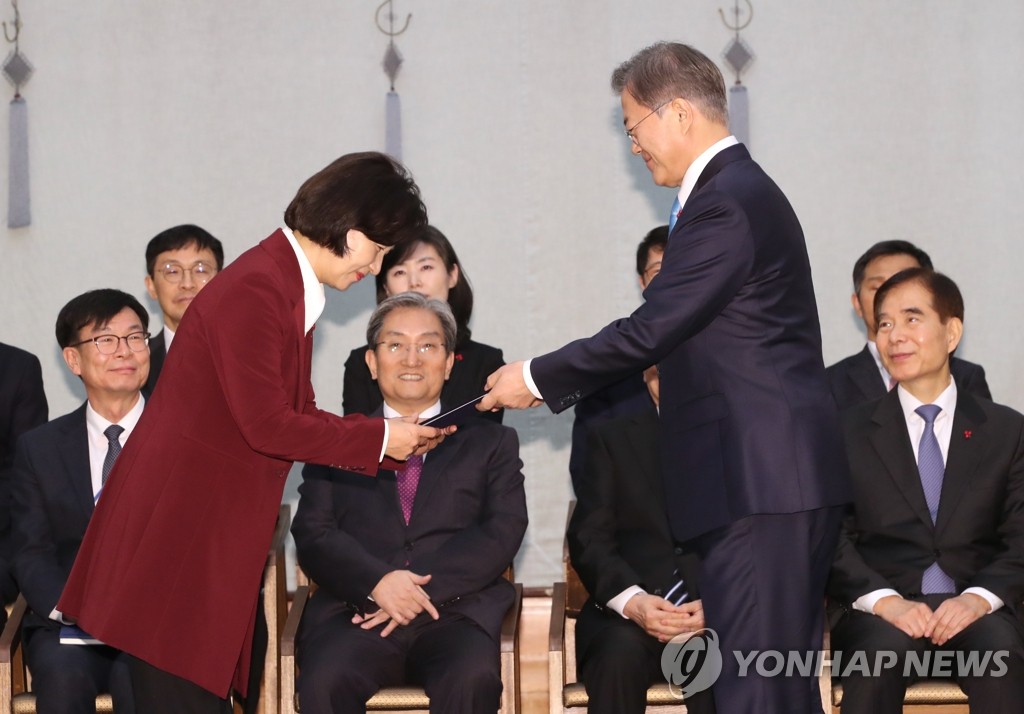 He was apparently referring to a strong call by many people here for reforming the prosecution, which they believe possesses excessive power and authority.

Choo, who was a judge and a five-term lawmaker, said she will do her best to seize the rare opportunity.

She said prosecutors should not misuse or abuse their power in ignorance of human rights. Rather, she added, they should gain public trust by stepping up efforts to find and punish specific crimes "with precision" like good surgeons.

"I think that's what the people desire and their order as the president said," she added.

The appointment of Choo came 80 days after Cho Kuk resigned amid prosecutors' probe into a scandal involving family investment and university admissions for his children. Cho was later indicted on multiple charges, including bribery.

On Dec. 5, 2019, Moon nominated the five-term lawmaker who led the ruling Democratic Party, as justice minister.

The installation of Choo, known for her determination to get things done, is expected to add momentum to the liberal Moon administration's prosecution reform drive. He used lead the ruling Democratic Party from 2016-2018.

The parliament is expected to handle two other bills next week on granting police more investigative rights.

The conservative LKP claimed the ruling bloc is pushing for the legislation in a bid to weaken or avoid prosecutors' probe into corruption, especially by presidential aides.

It has also voiced worries about the pick of Choo, a political heavyweight, as justice minister less than half a year ahead of the April 15 general elections.