The annual ice fishing festival is scheduled to take place for 23 days from Jan. 11 to Feb. 2 on a frozen river in the Gangwon Province county of Hwacheon, about 120 kilometers northeast of Seoul.

The world famous festival was originally scheduled to kick off on Saturday but was delayed by one week due to unseasonably warm weather. 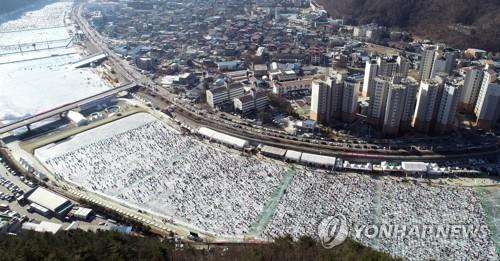 Approximately 20,000 fishing holes will be pierced through the ice over a 2.1-kilometer area about the size of 24 soccer fields, and about 200 tons of "sancheoneo" will be released during the festival. Sancheoneo is a species of trout known to live only in very clean fresh water.

It will also feature some 60 kinds of programs, including barehanded fishing, a sled contest, bobsleigh and ice soccer.

Launched in 2003, the event was chosen as the nation's best festival by the culture ministry in 2010 and has developed into one of the world's four major winter festivals. Many local and foreign news organizations have introduced the magnificent scene of people trying to catch fish through holes in the vast frozen river. In 2011, a leading global news organization introduced the festival as one of the world's seven wonders of winter. 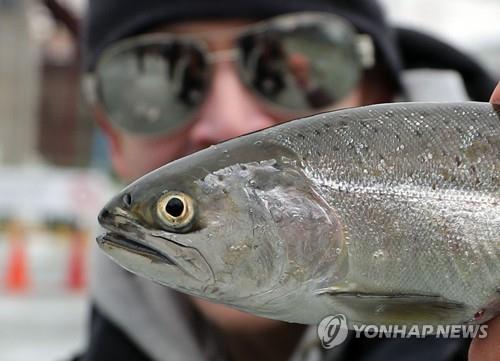 Last year, the festival drew 1.84 million tourists during its 23-day run, marking an increase of 6 percent from the previous year. The number of foreign visitors also set a new record of 146,000, with some 20,000 of them being individual tourists from about 40 countries.

As a fierce battlefield during the 1950-53 Korean War, Hwacheon is a symbol of national security and peace.

Hwacheon is considered a remote mountain village, as mountains and rivers account for over 90 percent of its land.

Hwacheon has a population of 27,000, with a larger number of Army soldiers stationed there.

As part of efforts to revitalize its stagnant local economy, the county government hosted an ice festival in 2000. But the lackluster ice festival failed to appeal to tourists due to limited content and weak competitiveness. 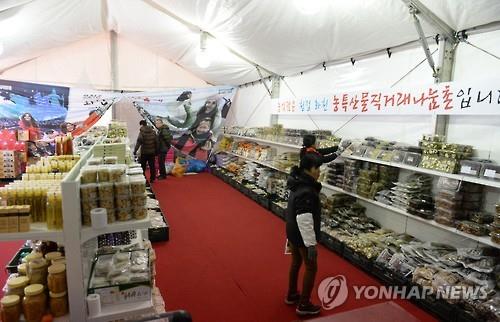 The first sancheoneo festival held in 2003 under the slogan of "Unfrozen Hearts, Unforgettable Memories" drew a crowd of 220,000 visitors.

Last year, the number of visitors to the festival surpassed 1 million for the 13th consecutive year.

County officials say the Hwacheon Sancheoneo Ice Festival has now grown into a strong backbone of the county's economy, accounting for over 10 percent of its gross regional domestic product.

A research agency estimated the festival's direct economic effects at over 100 billion won (US$86.4 million) annually.

Indeed, about half of the 200 tons of sancheoneo needed for the festival are supplied by fish farms in the county.

In addition, about 1.5 billion won worth of agricultural products grown in Hwacheon are sold during the festival.

Local restaurants, hotels and makers of various facilities and souvenirs are also beneficiaries of the festival, country officials said, noting it also creates about 3,000 jobs. 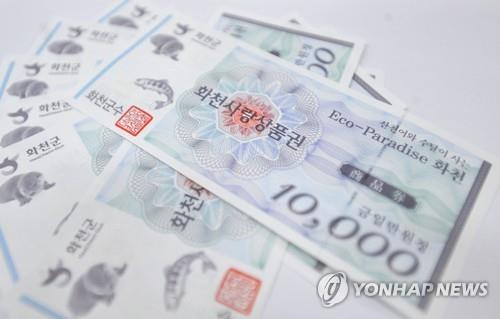 The ratio of visitors staying one night in Hwacheon jumped from 31.4 percent in 2018 to 34 percent last year.

The county's businesses reported a customer increase of 51 percent and sales rise of 31.7 percent.

During last year's festival, a total of 295,775 locally produced gift certificates were circulated, contributing to boosting the county's economy. 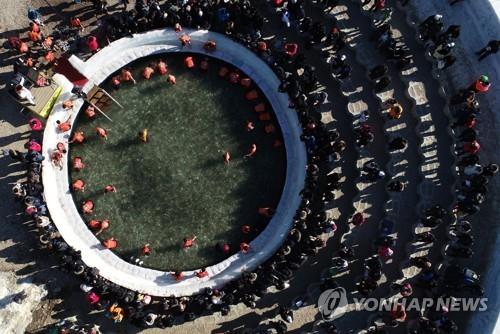 County officials said support from about 15,000 volunteers, over 60 percent of its residents, has also contributed to the success of the festival.

"The county government is trying to lead visitors to stay one night to better enjoy the sancheoneo festival. We hope many tourists come to the ice fishing festival again to have an unforgettable memory of this winter," Hwacheon Mayor Choi Moon-soon said. 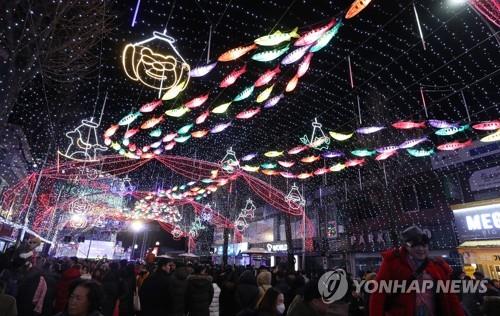 Hwacheon's ice fishing festival to kick off on Jan. 11

Hwacheon's ice fishing festival to kick off on Jan. 11