Kim Gunn, who took office last month, is scheduled to meet with U.S. Assistant Secretary of State for East Asian and Pacific Affairs David Stilwell on Friday. He is also expected to meet with White House National Security Council Senior Director for Asian Affairs Allison Hooker during his stay.

"We need to work hard on strategic communication between South Korea and the United States from the start of the year," Kim told Yonhap News Agency at Washington's Dulles International Airport when asked about the purpose of his trip.

"I just took office, so I want to meet with my counterpart, talk about overall bilateral relations, and prepare for some high-level discussions planned for the start of the year," he said.

Asked about the North Korean nuclear issue and negotiations between Seoul and Washington on renewing a cost-sharing deal for the upkeep of U.S. troops in South Korea, Kim deferred to the officials responsible.

On a possible meeting between South Korean Foreign Minister Kang Kyung-wha and U.S. Secretary of State Mike Pompeo in San Francisco later this month, the deputy minister said it is still under discussion. 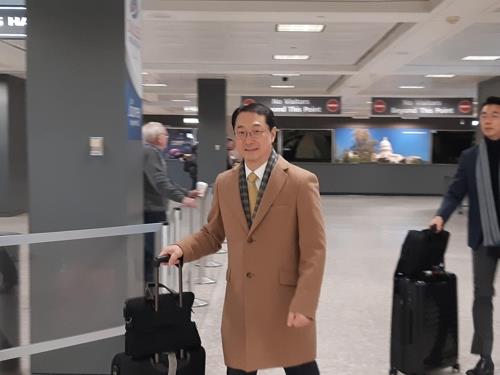